Estes family learning how to recover from near drowning

Kim Estes, above, hugs her son Jamie, after he worked hard to take a few steps during physical therapy at Key Rehab Associates. In August, Jamie nearly drowned in a neighbor’s pool. Because he was unable to get oxygen to his brain for an extended period, Jamie suffered brain damage that has limited his ability to function. Through physical therapy, Jamie has started to relearn how to walk and make purposeful movements. (Sam Gause / The Natchez Democrat)

NATCHEZ — Dr. Kim Estes was working in the clinic downhill from the emergency room at Franklin County Memorial Hospital when she heard the page that a helicopter would be coming in to airlift a patient to Jackson. 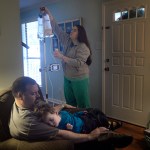 Jamie sleeps on his father David Estes’ chest while his mother Kim sets up Jamie’s feeding equipment. Because of his brain injury, Jamie must also relearn how to eat. (Sam Gause / The Natchez Democrat) 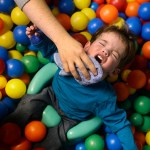 Jamie Estes is put into a little pool of plastic balls as a sensory exercise during physical therapy at Key Rehab Associates. The hope is that he will try to grab onto the balls. (Sam Gause / The Natchez Democrat) 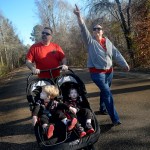 Kim Estes points at the moon in the sky as her husband David and son Harvey, 2, in stroller on the left, look for it as the family walks during a 5K the Bude First Baptist Church organized in support of the Estes’ son Jamie, in stroller on the right, who nearly drowned in a neighbor’s pool in August and suffered brain damage. (Sam Gause / The Natchez Democrat) 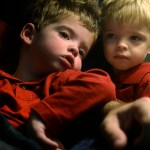 Before the accident, Jamie, at left, was much more outspoken than his twin brother Harvey, 2, but since, their personalities have flip flopped. (Sam Gause / The Natchez Democrat) 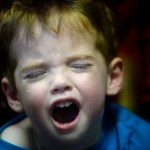 Jamie Estes cries during a difficult day of physical therapy at Key Rehab Associates. Jamie attends physical therapy to relearn how to walk and do other basic movements. (Sam Gause / The Natchez Democrat) 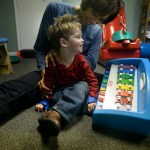 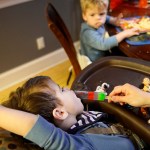 But when someone came down the hill to tell her why the helicopter was flying in, the doctor felt the kind of gut-twisting fear no amount of medical training can check.

“This nurse came down and said, ‘They’re bringing in a baby that drowned in Mr. Dickie’s pool,’” Kim said. “I was like, ‘There are no other babies in that area — that’s one of my babies.’”

She ran up the hill, finding the hospital staff huddled around the effort to revive a child on a triage table. It was her son Jamie, 23 days from his second birthday.

“I walked in, and immediately the nurse practitioner in the room said, ‘I have this doc,” and shut the door,” Kim said. “They didn’t let me in.”

Her husband David was there. They walked across the hall, sat on the floor of a supply closet, held hands and prayed.

A part-time minister at First Baptist Church in Bude and a full-time dad at home, David had spent the morning with the couple’s three children, Audrey, 4, and Jamie and his identical twin, Harvey.

The children were playing in the driveway on riding toys while David washed his truck when he realized Jamie wasn’t around.

Talkative and mischievous, Jamie was the kind of child who would just as easily climb over something than go around, and once he got something into his head he was determined to do it.

Something told David to check the neighbors’ yards to make sure his son wasn’t about to get himself into trouble.

David could see into the yard down the hill from them, so he went to the next  closest house, up the hill. He walked around the rear of the residence, where he knew the retired couple that lived there had a small pool.

Through the black, wrought-iron fence that surrounded the pool, he could see his son floating in the water.

“He was completely motionless,” David said.