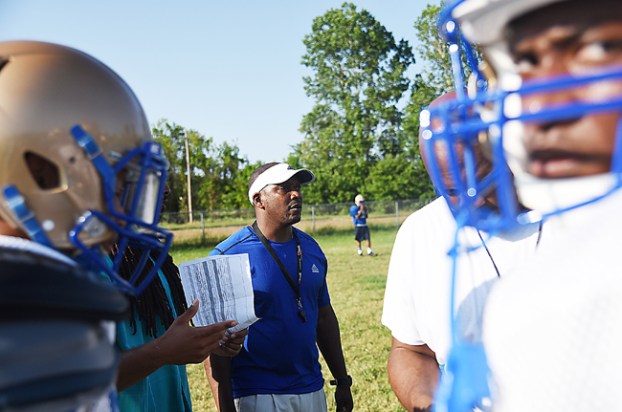 NATCHEZ — Natchez High School quarterback Chris Scott received a shotgun snap and strafed forward in the pocket as the imaginary defensive line closed in around him.

His target broke right, toward the sideline; Scott delivered a pass to his receiver’s hands from approximately 20 yards away with little arch on the ball.

Scott said the first days of spring practice aren’t bad for a quarterback who has spent the past few months on the diamond at Chester Willis Field. It’s time for him to change gears.

“We hit it hard,” Scott said. “I just came over from baseball, so it’s a lot right now, but we’re getting it done.”

Scott said Natchez High’s berth in the MHSAA 5A baseball playoffs cut into his practice time with the football team for about a week. He said, after eight years of football, the adjustment is simpler.

A junior-to-be, Scott is an upperclassman now. But instead of settling into a system he has grown familiar with after two years, Scott is adapting. Under the Bulldogs’ new head coach Roy Rigsby, Scott said things are different, but better.

“(Coaches have) taken the pressure of having to throw so much off the quarterback,” Scott said. “He’s opened it up for everyone to be successful.”

Rigsby said he is fortunate to inherit a team with speed.

“We have three or four good running backs and we plan on using them,“ Rigsby said. “It also gives us the opportunity to have two backs in the backfield.”

Rigsby said tempo is the biggest change to Natchez’s practices since he took over. There are also schematic changes on both sides of the ball, but those won’t be apparent until the Bulldogs hit the field for a live scrimmage.

“You’re trying to see what those guys on the bubble … will do ‘under the lights,’” Rigsby said.

Rigsby said he knows his defense is fast. But the speed isn’t what excites him the most about his defense at this point in the season.

“It’s the communication that has me smiling now,” Rigsby said. “Everybody being on one page is the main thing for a defense. If everybody knows what they are supposed to do, it is going to be difficult to execute against them.”

Scott said he particularly wants to harness during spring practice is the trust of his teammates.

“I want to stay close to my teammates and make our team have better chemistry,” Scott said. “I felt like (a leader) in ninth grade.”

Scott grins and adds, “It’s hard to be young.”

Scott said, as his junior season approaches, he knows being at the helm of the Bulldog offense is something he has to do.

“It’s hard in practice, but I promise, when we play somebody else, we’re going to shock a lot of people,” Scott said.

The Dart: Vidalia man studies, takes care of family, too

VIDALIA — For Rachard Singleton, his first year of college wasn’t just about hitting the books. It was about family.... read more