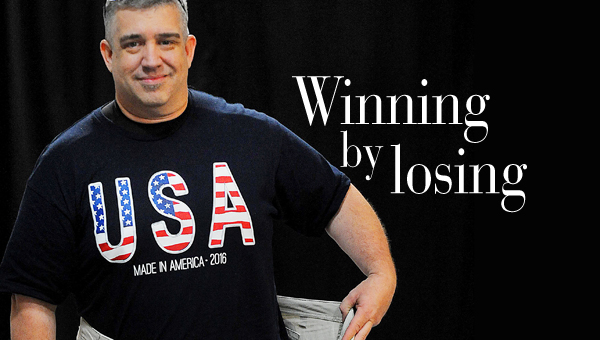 The Rev. Scott Green has lost 10 inches from his waist size, from a 52-inch waist to a 42-inch waist. Green, above, has kept a pair of his shorts as a reminder of how much weight he has lost since he signed up with the diabetes prevention program.

At 308 pounds, Scott Green said he did his best to hide his body.

He wore baggy clothes, avoided photographs and passed up days at the beach.

“I am very self-conscious,” said Green, pastor at First Assembly of God in Natchez. “I’ve done just about anything you can do to hide my body.”

So when Green enrolled in a Diabetes and Heart Disease Prevention Program for Adams County, he was “completely terrified.”

“I’m not an athletic person, really,” he said. “So putting myself in an exercise class, I just warned them ahead of time — ‘Don’t laugh at me.’”

Program participants were first evaluated and tested for diabetes and other health issues.

“My blood pressure was very high, and I didn’t even know that until I started the program,” Green said. “I knew something was wrong with my body, because I was getting to a place with my health where I could just tell.”

For the first six months of the free program, local lifestyle coaches, trained for the program, met twice a week in the evenings with residents for classes at local churches.

The first meeting of the week was a class with a textbook and lessons on calorie intake, how to track progress, keeping a daily meal log, tips on how to order healthy meals at a restaurant, form healthy eating habits and more.

The second meeting of the week was a group exercise class.

Now, since the education portion of the class is complete, the class has transitioned to use both meetings as exercise classes.

Since the program began in February, Green has lost 70 pounds and gained a great deal of confidence.

Green was one of 50 residents to enroll in the program, one of three programs the Clinton Health Matters Initiative of the Clinton Foundation, Humana and the City of Natchez have partnered to implement in the city as part of CHMI’s Natchez and Adams County Blueprint for Action.

The knowledge he has gained in the program, Green said, has been instrumental to the success he has experienced.

“It’s not a diet; it’s a lifestyle change,” Green said. “There’s no diet plan that says eat this, don’t eat that. They’ve told us that from the very beginning — ‘You are creating your own plan. We are just giving you the tips on what to watch out for.’”

Program coordinator Doris Woodfort said the program operates under the 80/20 rule, which is essentially that 80 percent of a person’s weight loss success is achieved through proper nutrition and healthy eating and 20 percent through exercise.

Green said his lifestyle coach, Demetric Felder, who is also coordinator of the Million Hearts Program, has been an inspiration.

“He has done more than just push me to exercise,” Green said. “He has inspired me. He has spoken to my life and inspired me on his own free time. He doesn’t have to do that. He could be committed to the program, teach the classes and home. But what he has done for me … it has meant the world.

“He has made me realize that I could do much more than I ever thought I could.”

Green is an example of how the program works if participants commit and use the resources available to them, Felder said.

But not everyone is.

Clinton Health Matters Initiative Regional Director Getty Israel recently told the board of aldermen that while the Healthy Moms, Healthy Babies program is experiencing great success, the response from the community to the other programs has not been favorable.

Of the 50 participants who signed up for the Diabetes and Heart Disease Prevention Program, 37 remain, Woodfort said. Ten churches initially signed up to help, and now only five are participating.

Adams County has one of the highest rates of tobacco use, Israel said. Funding has been set aside for 500 participants to complete the smoking-cessation program of the Million Hearts Program. Five participants have graduated the program.

Felder said though some people may not be able to participate in the sessions because of work or other obligations, the Million Hearts program has a partnership with the Mississippi Tobacco Quitline and has referred more than 30 people to it.

With Adams County remaining an underserved and underinsured area, the programs are “very vital programs to the health of Adams County,” Israel said.

Woodfort said she thinks at least some of the attrition and lack of participation can be attributed to residents simple not knowing the programs are available to them.

“For some reason, people have not taken advantage of this free program,” she said. “I don’t know what the cause is. We just need to get the information out there. It is a proven program, we just have to make sure people know that we have it available to them.”

The funding for the programs ends in January, and Israel said plans are under way to figure out ways to keep the programs operating in Adams County.

CHMI is also working to start a fourth program, a diabetes self-management education program, as a partnership with a local physician, Israel said.

Felder is optimistic that stories such as Green’s will inspire other residents to participate in the programs.

“The opportunity to continue this program is great, and it is a necessity,” he said. “These are just humble beginnings. These people are 45, 55, 65, 75 years old, and they are seeing changes in three of four months. When people see the results of these few, they will want to join.”

Medicare will help ensure the Diabetes and Heart Disease Prevention Program continues once the grant ends, and Woodfort said the program is working to see if accepting other insurances can be incorporated into the program.

One of the keys to continuing the programs, though, will be ensuring residents are participating, Mayor Darryl Grennell said.

Following Israel’s recent presentation to the board of aldermen, Grennell met with Israel and other program representatives to figure out how the city can help boost enrollment in the programs, especially the Diabetes and Heart Disease Prevention and Million Hearts programs.

“We need these programs in Natchez and Adams County,” Grennell said. “The bottom line is the more you get people involved in their health, the healthier your community is.”

Grennell said ideas about spreading the word about the programs include hosting a health fair, monthly information sessions, town hall meetings, weekly newspaper columns and other methods. Grennell said some of those initiatives would hopefully be under way in four to six weeks.

Green said he hopes others will learn about the program and take the step toward changing their lives.

“It has definitely changed my life,” he said.

Green has hit a few big milestones since February. Two days before his daughter Jessi’s recent college graduation, he was able to enjoy a shopping trip at a department store.

“I was able for the first time, to walk past the big and tall department and find pants that fit,” he said. “It felt so amazing, I started crying. And to go to my daughter’s graduation and have her hug me, and her arms be able to go all the way around me, it was just an amazing feeling.”

But Green is still approximately 40 pounds from his goal and says he plans to stick with the program, and hopefully use what he has learned to help others who want to enroll in the program next year.

“It’s really up to the individual, I have learned,” Green said. “You have to find your motivation. Having my wife (Suzanne) and my daughters (Victoria and Jessi) be so proud of me, that has really motivated me. I know that I can do this.

“I still have a long way to go … but I am going to continue no matter what. I’ve come too far to give up or end when the program is over. This has changed my life, and I know it can change other people’s lives, too.”

For more information about enrolling in the Million Hearts Program, contact community health advocates Billie Jean at 601-334-5038 and Nicole Williams at 601-870-6012 or williamstn@bellsouth.net. The Diabetes and Heart Disease Prevention Program is scheduled to begin enrollment again in January.

NATCHEZ — A Natchez resident has filed an appeal in Adams County Circuit Court of the Natchez Board of Aldermen’s... read more