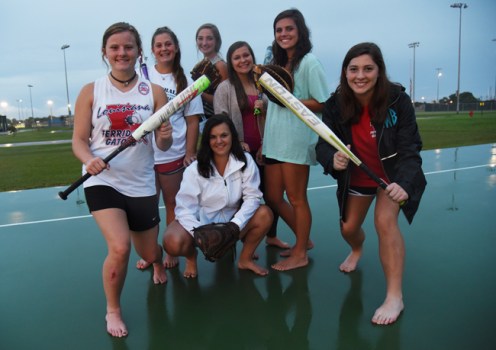 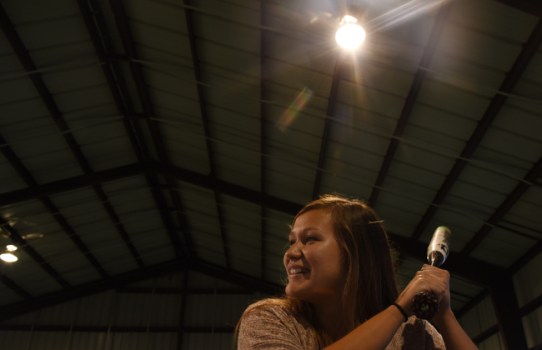 Gonzales, a left-handed pitcher for the Gators, practices her batting stance. (Nicole Hester / The Natchez Democrat)

Ferriday Gators pitcher Cassie Gonzales knows exactly what to expect every time she takes the rubber.

“I love it,” Gonzales said. “The most anyone (on the team) has pitched in one game are three innings.”

A system of rationing pitchers is perhaps what sets the Gators apart from this weekend’s Dixie Debs World Series in Alexandria.

While softball pitchers sometimes shoulder high inning counts, pitching multiple complete games in the span of a single weekend, Gators coach Rut Horne’s philosophy values two to three innings at full throttle more than a complete game in which each player in the batting order faces a pitcher two to three times per game.

Horne said he usually carries a minimum of five pitchers on his roster, but he doesn’t have much of a choice this season.

Due to various injuries and regulations that prevent Horne from adding players between tournaments, the Gators have the minimum of nine players required to play in the World Series.

The small roster has put some pressure on players to stay healthy over the summer.

“If we get hurt, we’re going to sit in the outfield,” Brianna Henson said.

First baseman Darby Beach said she thinks a nine-girl roster is an advantage because she can count on the Gators pitching depth, and she sometimes gets to the plate five times per game in the third spot.

In tournament play, pitchers are only allowed 15 innings over a potential of seven games. By rotating pitchers every two innings, Horne saves his players for future games without exhausting their inning count.

Gonzales, the team’s oldest player at 18 years old, is the team’s lone lefty. Gonzales might hurl breaking balls to the top of the batting order, then Henson could enter with higher velocities in the upper 60s.

“It really mixes it up,“ catcher Makenzie Landers said. “(Gonzales’) spin is outrageous, (Henson) has heat and Bailey Book has a nasty screwball.”

The philosophy has served the Gators well so far. Ferriday has not lost a game in the district and state tournaments leading up to the World Series.

Players said pitching, small ball and sound defense are important, but there’s one foolproof way for Ferriday to make a deep run.

“(The key will be hitting) dingers,” Landers said.

Ferriday travels to Alexandria for the tournament Friday, and the first game in the single-elimination tournament is at 9 a.m. Saturday.