Owner says he plans to begin renovation of Eola in 2017 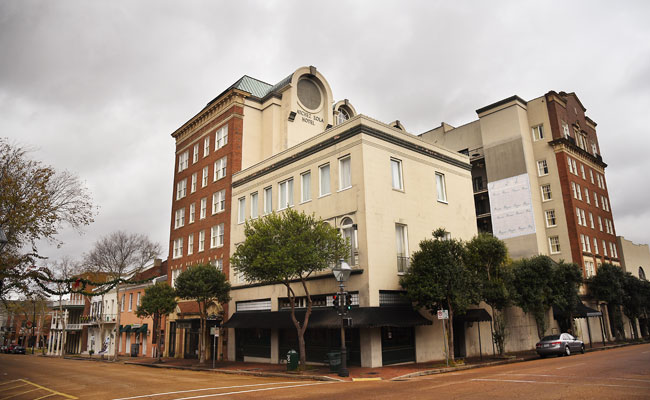 NATCHEZ — Two years after the Natchez Eola closed its doors as a hotel, the building still sits vacant.

The empty hotel has been the target of vandals and has suffered damage in storms.

The vacancy is one that Eola neighbor and Biscuits & Blues restaurant owner Peter Trosclair says he has felt greatly impact his business.

“I’ve probably felt it more than anybody,” Trosclair said. “When (Eola guests) parked, they had to walk by my smoker to go to the hotel. It probably knocked off a good bit of my business.”

While he would like to see the Eola return to its use as a hotel, Trosclair said “anything is better than nothing” at this point.

“It’s one of the two main attractions on Main Street,” he said. “If somebody tells (tourists) to go to Main Street, they tell them to look for two things — St. Mary and the Eola. I just think anything would be better than nothing. If the building was restored, and they put in a nursing home, that would be better than having a vacant building. I’d rather have it be a hotel, but I’d rather see something there than nothing.”

Andrew’s Tavern is right next to the Eola, and owner Sammy Atkins said he, too, has seen a negative impact on his business with the closure and vacancy of the Eola.

“I would say 10 to 15 percent of my weekend business was garnered through Eola guests,” he said. Any time the focal point of downtown is taken, it hurts everyone around. In talking to nearby business owners, they feel the same.”

Developers say the long and at times “frustrating” process of planning and finalizing the project may soon end, and construction could begin early next year.

Plans to renovate the historic hotel and transform the building into senior-living apartments were submitted to the City of Natchez for approval in January. The plans received final approval in April.

Following that approval, the project’s architect and consultants had to redesign the project to the approved standards, said David L. Roos, Lubin’s partner in the project and president of Roos Enterprises Inc.

“That involved a great deal of work,” Roos said.

Revised plans were completed in early September, Roos said, and the developers then signed a term sheet with Midland States Bank for the construction loan for the project.

“Part of their process is to complete all of their due diligence, (including) a market study, feasibility, appraisal, environmental, plan review, etc.,” Roos said Friday. “They were hoping to have everything completed by December, but just notified me that it was going to roll into the New Year. Once Midland has completed their process, we will be closing with them and starting construction.”

That could be late January or mid-February, Lubin said.

The main reason the plans for the building’s development had to be reworked, Giani said, is because the ground floor had to be open for the public with commercial tenant space to qualify as a mixed use building.

“This is the only way that building could satisfy the requirements of a mixed use building,” he said. “A purely residential structure would not have (been approved) and is not permitted in the central business district.”

Giani said he looks forward to seeing the Eola restored and in use.

“As the tallest building in Natchez, the former Eola hotel is a centerpiece for the central business district,” he said. “I look forward to the day that this building is back up and running and will do my best to work with the owners to ensure it enhances the socioeconomic environment of downtown Natchez.”

Natchez Mayor Darryl Grennell said he, like many people in Natchez, is ready to see the Eola project move forward.

“Nobody wants to see it vacant,” he said. “Especially with tourists, we don’t want to see that beautiful hotel vacant. We are ready to see it being utilized.”

Ward 1 Alderwoman Joyce Arceneaux-Mathis, in whose ward the Eola is located, said she thinks the city will need to continue to be patient and business friendly with property owners looking to invest and open businesses downtown.

Roos said the Eola project would cost approximately $22 million, with $5.2 million in equity from the ownership group as well as state and federal historic tax credits.

“We understand that our delay has negatively impacted our neighbors and nearby businesses,” Roos said. “Unfortunately, some things have been out of our control. Please know that once this great historic project is completed, the community will be pleased with the result and this area will be thriving again.”

Atkins said he is hopeful that moving forward, the use of the Eola will be for the best for Natchez.

“If the Eola is used for the wrong reasons, it will only hurt us in a worse way,” he said. “I have a good feeling our new mayor will help direct the project in a way that will revitalize downtown, because we all sure need it. When Main Street dies, your city dies, and right now we put our heart in the hands of city leadership.”