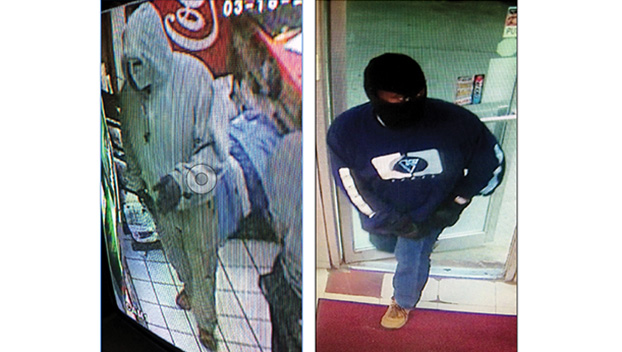 The Natchez Police Department released two photos from surveillance video of two suspects from recent store robberies. The photo at left was taken Saturday night at the Sprint Mart on Seargent Prentiss Drive. The photo at right was taken March 2 at Kaiser’s Food and Fuel on U.S. 61 South. (submitted)

The photos were captured from security footage recorded during Saturday night’s robbery of the Sprint Mart on Seargent S. Prentiss Drive near Merit Health Natchez and during the March 2 robbery of Kaiser’s Food and Fuel on U.S. 61 South.

At least five convenience stores have been robbed in approximately three weeks.

The Sprint Mart on Wood Avenue was robbed March 7.

Christopher Wimberly, 35, 1018 Martins Lane, was arrested and charged for the robbery of the Morgantown Exxon. Police have said security footage has eliminated Wimberly as a suspect in the other robberies.

NPD Lt. Kenneth Stampley said Monday that the police department needs help from members of the public to catch the robbery suspects.

“Anybody that hears something or knows something should call us,” Stampley said.

Anyone with information about the robberies should contact Crime Stoppers at 601-442-5000.

Iles Drink to that: Images from Greg Iles Sunday…