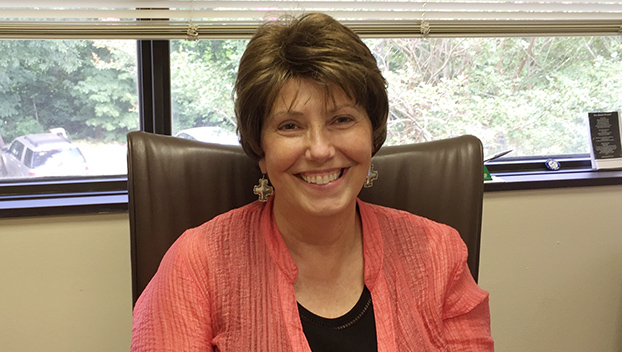 NATCHEZ — Persistent lower back pain sent Naomi Jones to the doctor in 2014 for what was believed to be a bladder infection.

After two or three different antibiotics and no relief, Jones’ doctor ran tests that revealed cysts on her ovaries, and she was sent to Jackson for surgery on Sept. 17, 2014.

What should have taken less than an hour turned into four and a half hours in the operating room once doctors discovered two large tumors, one of each ovary.

It was likely stage 3 or 4 ovarian cancer and was wrapped around her colon, doctors told Jones’ family.

Another surgeon was brought in to perform a full hysterectomy and remove 20 inches of Jones’ colon.

“It really shocked my family, my three siblings, two sons and my husband who were there,” Jones said. “They were just expecting a surgery that should have lasted under an hour.”

When Jones awoke to find out she had cancer, her doctor gave her a key piece of advice.

“While I was in recovery, he came in and said, ‘You’ve got to be very, very strong for your family. They are devastated. They are in shock. They had no idea this was going to hit them, and they are very upset,’” Jones said. “I told him that was not a problem, that God had this, and I would be fine.”

Jones was in the hospital for a week following the surgery.

Within a month, an infusion port was installed, and Jones was prepped for chemotherapy.

At home after her first chemo treatment, Jones developed a fever, and doctors determined she would need an expensive shot with each treatment to help her bone marrow produce more white blood cells. That meant she would be staying overnight in Jackson for each treatment instead of coming home.

With strong support from family, friends and people who reached out to help any way they could, Jones did her best to maintain a positive outlook.

“There were times I wanted to give up,” she said. “I’m not going to tell you there wasn’t.”

Her last chemo treatment was in February 2015.

“I’ve been cancer-free since then,” Jones said.

Of four children, Jones and two other of her siblings have had cancer, her older sister a kidney tumor and her brother prostate cancer.

Jones is just one of the many cancer survivors who will be at this year’s Miss-Lou Relay for Life today.

Relay for Life events across the country raise money to support the American Cancer Society’s research in hopes of one day finding a cure.

“Without hope and without faith and without the fight, where are we? To me, Relay for Life is a venue for helping us realize that there are successes, that we can have hope, and we can fight as a community and as neighbors and help each other get through this.”

Relay begins today at Concordia Recreational District No. 3’s complex in Vidalia, with survivors registration and a reception at 4 p.m. and welcoming events set for 6 p.m.