What is next for FOR Natchez revitalization project?

NATCHEZ — After completing Phase 2 of the downtown revitalization plan, the FOR Natchez team soon will try to answer “how?”As in, how can the bevy of propositions presented at Tuesday’s public meeting be implemented in the heart of Natchez?

As lead consultant Phil Walker put it, some of the plan’s ideas could be implemented immediately following the plan’s completion, while others would take years.

“Ideally, you want to see as much of the plan implemented as possible.”

Tuesday’s concept plan, as Walker said, focused mainly on the ideas themselves, many of which stemmed from suggestions of Natchez residents. Because the concept plan contained so much information, Walker said Phase 2 mainly aimed to gauge public feedback strictly regarding the ideas.

“Once you see how people respond to the ideas, then you can say ‘OK now how are we going to pull that off?’” Walker said.

Moving forward to Phase 3, the team will construct a draft of a “master plan” using every ounce of feedback and data collected to date. Walker said that plan would look similar to what the team presented Tuesday but would be more detailed and refined.

Also, he said Phase 3 would involve more discussion about implementation.

Part of the team’s job involves forecasting how long each idea should take to implement. Walker said the consultants would assemble a spreadsheet that classifies each idea into one of three implementation categories: short-term, mid-term and long-term.

While the group has yet to fully delve into matter, Walker provided some examples of ideas that are easy to categorize.

One of the short-term projects, Walker said, is revising the city’s zoning, which Walker listed as a top priority of the plan. Another example Walker provided is the Broadway depot building, which he thought could be renovated relatively quickly.

These types of ideas are what Walker called “low-hanging fruit,” concepts that the city can fix easily and efficiently.

On the opposite end of the spectrum lie the more ambitious ideas, such as an amphitheater. Walker called the proposed amphitheater — with the suggested location of under the hill and along the riverfront — a “down-the-road” idea.

Comparatively, the consultants also proposed constructing an open-air pavilion or stage on the bluff, which would serve a similar purpose while preserving precious green space of the area. Walker said that concept could be implemented relatively quickly and with low costs.

Walker said these types of concerns would be fleshed out during the next phase of the revitalization project over the course of approximately two months.

Afterwards, Walker said the consultants would submit their draft of the master plan to FOR Natchez for review. At that point, FOR Natchez could issue feedback or request revisions for the plan.

At that stage of the project, a draft of the plan would be accessible on FOR Natchez’s website and Facebook page, FOR Natchez President Chesney Doyle said. That would give residents, Walker said, an opportunity to really familiarize themselves with the plan.

The revitalization plan has been an iterative process that relies on residents’ input. Following Tuesday’s presentation, Doyle said the feedback continued to pour in.

Doyle said residents would also be able to provide feedback online once the draft of a master plan is posted.

Then, the project would move on to its last phase: a final presentation of the plan.

While the project does not have a definitive timeline, Doyle said she hopes the project would be completed by October or November.

As Doyle pointed out, all aspects of the project, whether it is rezoning or building an amphitheater, “require planning. It won’t happen overnight.”

About two months down the road, residents should have a better idea of what the future holds for downtown. 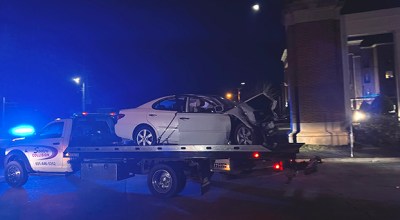