No charges filed in bridge collapse 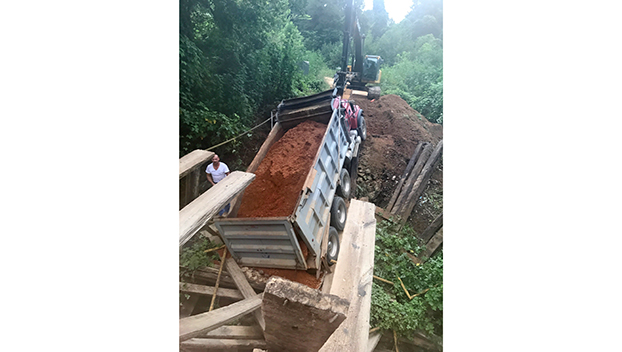 Adams County Sheriff Travis Patten submitted this image of a bridge collapse on Artman Road near the county line.

At approximately 5:24 p.m., Saturday sheriff’s office deputies arrived at the Artman Road bridge near the Jefferson County line and found a Lloyd Songe Marine Inc. red dump trunk in the creek bed. The north end of the bridge had collapsed.

The owner of the dump truck, Lloyd Songe, brought two track hoes and a bulldozer to excavate the truck. The truck, which is insured, suffered damage to the front end, gas tank and other miscellaneous damage.

The Artman Road bridge was repaired in 2013 after having been shut down for four years. District 5 Supervisor Calvin Butler said when he first came on the board getting the bridge fixed had been a priority, as residents were having to travel an additional 10 to 15 miles to get home.

“The residents told me (the dump trucks) they had been going back and forward on that bridge all week,” Butler said. “That bridge is really just for cars. It is not for heavy duty vehicles like that.”

The truck was left on the north end of the bridge to block the roadway. Barricades were placed on the south end to keep traffic off the bridge.

Jefferson County was also contacted to see if they could get the bridge north of this bridge reopened, so residents that live in between the two bridges would have a quick way out in case of emergencies.

One of the track hoes working to excavate the truck busted a water line and the Adams County Water Association was contacted to repair it.

The accident is under investigation and no citations have been issued at this point.

Butler said he thinks the owner of the truck or the driver is going to have to pay for the damage.

“We had a sign posted that it couldn’t handle that weight limit,” Butler said. “He ignored the weight limit. I don’t know how Robbie feels, but I feel like he is going to be liable to pay.”

Butler said he would speak with Adams County Board Attorney Scott Slover and Dollar soon about holding the driver or company responsible for the damage to the bridge.