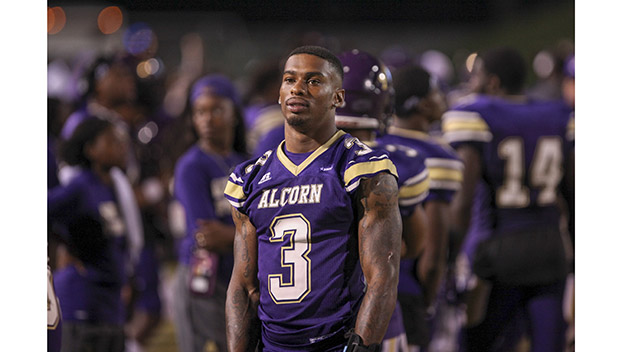 Alcorn State University defensive back OJ O’Neal stands on the sideline Saturday during his team’s season opener against Miles College in Lorman. O’Neal is one of four former Jefferson County High School stars on the Braves roster. (Cortland Wells | The Vicksburg Post)

Fifty-five sets of eyes fluctuated from left to right as Faye Brown paced along the front row of Jefferson County High School’s home bleachers. And as the principal offered advice, encouragement and inspiration to her school’s football team, it seemed she was hand-delivering the words to each player’s front doorstep.

On that overcast Wednesday afternoon just a little more than a week before the Tigers would take the field for their first game this season, Brown concluded her speech with one simple request.

So they stood, and Brown didn’t see players who currently wear those jerseys, yet ones who once did.

After trading in for new numbers, Christian, Nick and Matthew Brown — Faye’s sons and graduates of Jefferson County — all play football at Alcorn State University.

“I did that to try to connect with them,” Faye Brown said. “Jefferson County is small.

We don’t have much business industry like a bigger city would, and some people look down upon us. For them to see our product on a college field, they see that anything is possible.”

The separation between the two schools is just 15 miles, but that isn’t stopping the Braves from taking talent where they can find it.

With the addition of former Tiger O.J. O’Neal, Alcorn currently has four Jefferson County graduates on its roster.

“Anytime you can get a bunch of guys from a school such as that, you want to try to recruit those kind of players,” Alcorn coach Fred McNair said. “That’s what we strive to do. It doesn’t matter if they are down the street, but we always try to get those guys that can help us out.”

O’Neal received the most responsibility last season after taking over the starting cornerback position midway through the year. After playing in nine games, he racked up 36 tackles — with 16 solo stops. He also grabbed one interception to go along with five pass break-ups, a blocked kick and forced fumble.

“He’s one of the toughest guys on the defense,” McNair said. “In practice we have to tone him down a little bit, because he’s just 110 percent.”

In the past, the Brown brothers have yet to all play at the same time. Last season as a freshman, Matthew took a redshirt year and Christian didn’t play with a shoulder injury. Nick appeared in nine games.

“I’m waiting on the chance to see all three boys together,” Faye Brown said. “It just hasn’t happened yet, but we are really proud.”

Faye Brown added though they are her sons, Jefferson County’s representation means a lot to the school and community, too.

“We may be small, but the pride is enormous,” she said. “I would say 90 to 95 percent of the college-educated people in this community graduated from Alcorn. It speaks volumes to have four players (from the school) at the same time.”

The Tigers are coming off a demanding victory over Amite County last Friday night, 38-8.

“It’s always been a strong connection. I can’t even put into words what Alcorn has done for us,” Herrington said. “On a day-to-day basis being a coach is really hard, but seeing things like them running out of the tunnel on Saturdays makes it worth it. We are just working on getting more guys there.”

While McNair said he doesn’t expect anything less of the former Tigers than he does of the rest of the team, he wants them to enjoy the experience.

“When you have a bunch of guys that come from right down the street, you get the fan base from that school, too,” he said. “We expect them to play hard since they are a part of this program, but we want them to live for the moment of playing ball games in front of their home team and home crowd.”

Jefferson County is slated to host South Delta at 7 p.m. this Friday, while Alcorn travels to Florida International University at 7:30 p.m. Saturday.

With more than 200 young baseball players last year in the Franklin County Dixie Youth organization, there was a certain... read more