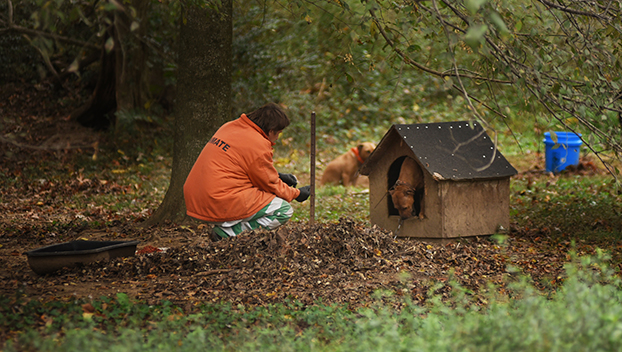 An inmate with the Adams County Sheriffs office encourages a dog to come out of its house before Dr. Robbie Savant gives the dog a checkup Wednesday at Tommie Queen’s property in the Cranfield community. (Nicole Hester / The Natchez Democrat)

NATCHEZ — Fundraising efforts Wednesday to benefit the dozens of dogs seized after the discovery of a suspected dog-fighting operation Tuesday had raised more than $20,000 in just nine hours.

“I’m so thankful,” Adams County Sheriff Travis Patten said. “I hope and pray we can reach our goal.”

The GoFundMe’s goal is $50,000. To donate to the cause visit: https://www.gofundme.com/acso-animal-rescue

The Adams County Sheriff’s Office began asking the public for help Tuesday after discovering more than 56 dogs on a property in the Cranfield community outside of Natchez. Also found on the property were approximately 25 skulls of other dogs in what the sheriff described earlier as a bone yard.

The living dogs, many of which were injured and left without access to food or water, were too numerous for the Natchez-Adams Humane Society or rescue centers in neighboring counties to take on, Patten said.

“Like I’ve said, until punishment for animal cruelty is increased, we’ll continue to find animals like these in the future,” Patten said. “We need to be able to care for them. I’m thankful for the help we’ve received, I just hope it continues.”

Deputies and county inmates have been keeping watch over the majority of the surviving animals at the site they were found because no suitable location could be found to house that many large animals, Patten said.

“I can’t say enough about the men and women from the ACSO,” the sheriff said. “This was beyond what any of us ever had experience with and everyone has gone above and beyond here.”

Patten said the inmates that had been helping care for the animals on site were even affected by the horrible condition of the animals.

“These guys are incarcerated and even those guys’ hearts were bleeding,” Patten said. “It was pulling on their heart strings. They were just loving on the dogs.

“In a way, it was therapeutic for them and good for the dogs too.”