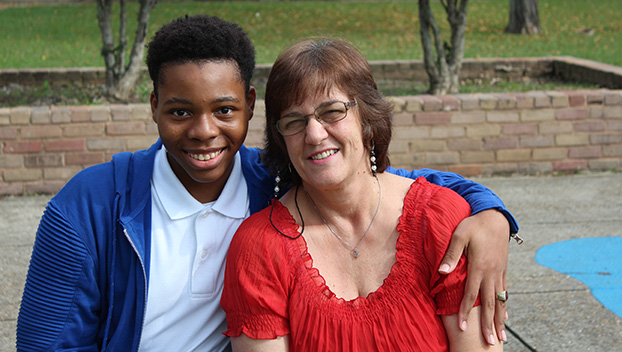 This was the third time her hip had dislocated since June 2017, and each time the pain immobilized her. She was far from her home in Kingston, she was in pain and she was alone.

Then Kaiser said she heard a voice approaching.

Watson was leaving Walgreens with his grandmother, Carolyn McNulty, when he saw Kaiser in distress.

Once Kaiser explained what had happened, she said Watson guided her to her car, lifted her into the driver’s seat and sat with her as she called her husband.

When her husband told her he would meet her at the hospital, Kaiser said she assured Watson she would be fine driving to the hospital alone.

But when Watson and his grandmother followed Kaiser back onto the road, they noticed her veering from side to side.

Instead of leaving her, Watson said he and his grandmother decided to turn on their flashers and make sure Kaiser got to the hospital safely.

Kaiser said when she arrived at the hospital, she wondered how she would get someone to bring her a wheelchair.

Watson retrieved a wheelchair, helped Kaiser into it.

When he realized the wheelchair did not have a leg support, Kaiser said Watson held her leg still while McNulty pushed the chair.

“That baby, I call him my baby,” Kaiser said, “he sat there and held my leg the whole time and to me, he was my hero that day.”

Kaiser said Watson stayed with her until she told him he could leave, but said just saying thank you to the student did not feel adequate.

On Nov. 7, Kaiser publicly recognized Watson in front of his JROTC classmates.

Kaiser said she wanted McNulty, too, to receive praise for helping her in her time of need.

Kaiser said McNulty, who has raised Watson since he was 11, was the positive role model who taught Watson what to do in emergency situations.

Until this point, Watson said he has wanted to become a member of the Air Force.

Now, however, Watson said he has found a new interest in the medical field.

No matter what career Watson chooses, Kaiser said she will always be grateful for the help he provided her.

“To me,” Kaiser said, “it makes me feel good to know that (there are) still some good people in this world that care.”