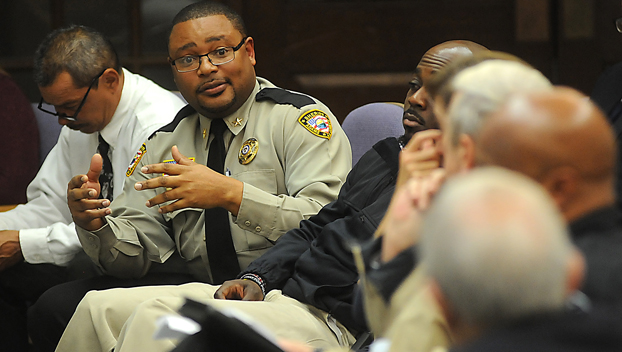 The award, which is given by the Animal Advocacy Initiative of Mississippi, Defense of Animals and the Mississippi Animal Rescue League, commended Patten’s service in fighting for the rights of animals in Adams County.

At a town hall meeting Monday night, where members of the community voiced their support for stronger dogfighting laws in Mississippi, Mayor Darryl Grennell called Patten to the stage to receive his award.

Instead of rising alone, Patten invited all of his staff members present and other law officers — such as Natchez Police Chief Walter Armstrong and Wiggins Police Chief Matt Barnett — to join him in receiving the award.

Doll Stanley, director of the Justice for Animals Campaign for In Defense of Animals, presented the plaque to Patten and the group.

“I am sick and tired of hearing people say ‘Don’t call law enforcement, they won’t don’t anything,’” Stanley said. “I have never had officers not get involved when called. We are so thankful. We are so proud. This award goes to all of you, and we are so grateful.”

Two major dogfighting rings have been discovered in the last two years in Adams County, and Stanley said Patten’s leadership has been instrumental in the arrests made in both cases.