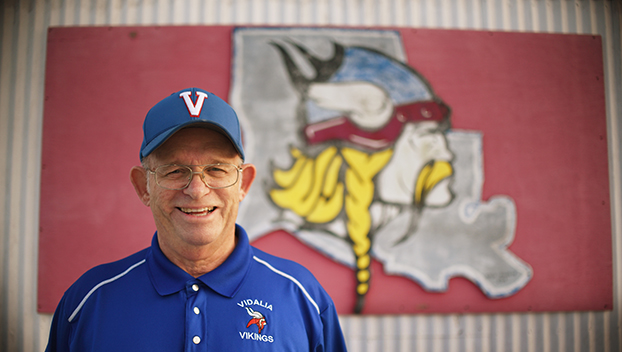 Longtime Vidalia High School Head Football Coach Dee Faircloth resigned effective May 31 after the Louisiana High School Atheletic Association notified schools of a law requiring head football and basketball coaches to be fulltime faculty members, which Faircloth was not after having retired the first time in 2009. (File Photo, The Natchez Democrat)

VIDALIA — Even after 42 years as head coach and a stadium with his name on it, nothing was guaranteed for Vidalia High School’s Dee Faircloth.

As far as Faircloth was concerned, there was a bevy of talented young coaches ready to take over the Viking football program after a vacancy opened this past February. But for many others, there was only one person fit for the position.

“They put it up, and I wasn’t even going to apply for it,” Faircloth said. “They had six good applicants for it, so I knew I might not even get the job.”

Not only did he get the job, Faircloth took this year to make it his own — again.

After winning a total of 10 games in the past seven years, The Vikings (9-3) recorded their first winning record this year since 2004. They reached the playoffs — and won their first playoff game — since the same year. They also defeated the No. 1 team in the state and parish-rival Ferriday High for the first time since 2008.

For his efforts, Faircloth was named The Natchez Democrat’s 2017 All-Metro Football Coach of the Year.

Since the first time Faircloth was hired as Vidalia’s head coach in 1969, he said things are different now. This year, Faircloth said he learned to trust his staff more than he did when he was younger.

“I used to coach every play in practice,” he said. “I learned in my old age to delegate the authority. It worked out pretty good. At least I didn’t have a heart attack.”

Without them, Faircloth said, coming back as head coach would not have been possible.

“I’ve relied on my coaches,” he said. “That’s who has carried us. They have picked me up and carried us through this year.”

On the other hand, Norris said Faircloth’s presence was invaluable to the quick turnaround, after Vidalia finished last year 3-7.

“He was the anchor, the lighthouse,” Norris said. “He has always been there, and he is like a father figure.

“We knew nobody could bring the community back like he did. As soon as he got the job, we had people immediately walking in the door asking how they could help.”

Faircloth also credits his players and their drive to succeed.

The Vikings had just one member on last year’s all-district team, but this year had eight on the first team and another nine on the second team.

“I love these kids,” Faircloth. “I knew how hungry they were, they just needed to win. I wanted them to be happy on Saturday mornings. I really think they enjoyed it.”

When looking over the schedule for this past year, Faircloth and his assistants agreed they could settle on ending with an even record.

“We thought if we went 5-5 we would be happy,” Norris said. “If we went 6-4 and hosted a playoff game we would be ecstatic. We never thought we would win nine games and host two playoffs games.”

“I thought we had a shot at winning five,” Faircloth added.

As the record shows, this year really was much different than Faircloth’s first as a head coach.

“We won our first two games and were ranked third in the state,” he said. “I thought I must have been the greatest coach.

“After that I lost eight in a row.”

From then until now and all the games in between, this year’s win over Ferriday ranks high on Faircloth’s list of greatest hits.

“It was probably the biggest win of my career,” Faircloth said. “We had no chance, and there wasn’t a soul outside of our dressing room that thought we could win.

“I went into that game thinking if we go out there and play competitively, not get anybody hurt we would be OK to finish the season.”

But of course, there was a different result.

“Coaches called me from all over the state asking how we did it,” Faircloth said. “It was a total effort. All I ever heard was we beat Ferriday. It was an amazing night.”

For a coach who has never led another program and was once retired, Faircloth said he doesn’t plan to go anywhere now.

“I always said if I get in a place, I would stay there as long as I could,” he said. “I must be the oldest coach in Louisiana.