Coming to the rescue: House fire leaves family with little 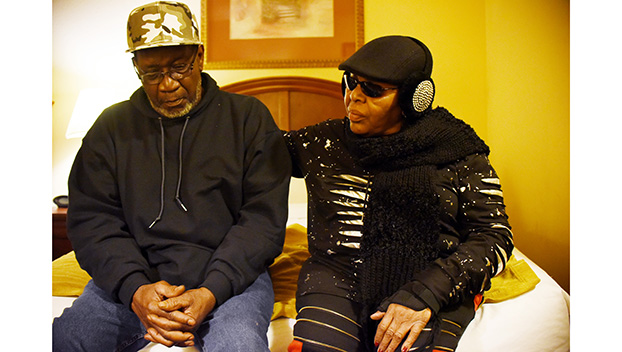 James Foster is comforted by his wife Evaline Foster while they talk about losing their home in a fire that happened on New Years and now living in a hotel with donated clothes and other items Friday at Comfort Inn and Suites in Vidalia. “All we have is each other now,” Evaline Foster said, “We’ve always been close but we are closer now than ever.” (Nicole Hester / The Natchez Democrat)

CLAYTON — Evaline and James Foster walked out of their house, which would soon be engulfed in flames, with nothing but the clothes on their backs.

Though neither was injured in the blaze, the couple salvaged nothing from the place they had spent the last 45 years of their lives.

But the couple has remained resolute, Evaline Foster’s sister, Lucille Fair, is working to help the couple get back up on their feet.

Fair has opened two accounts — one at United Mississippi Bank and another at Delta Bank — for anyone who would like to donate to the family.

“It doesn’t matter how much it is — any donation would help right now,” Fair said.

The couple lost everything after a fire started in the rear of their house.

Concordia Parish Fire District 2 Chief Nolen Cothren said the department received a report that the fire originated in the dryer.

An investigator confirmed that the fire began in the utilities room, but extensive damages prevented him from verifying that the dryer was the exact cause.

“He couldn’t determine that because everything was totally destroyed,” Cothren said.

But although the experience has been “traumatic,” Evaline Foster said at the end of the day, everything lost in the fire are only materials.

“We know that God is still in control,” she said. “As long as me and my husband have each other, we can replace everything else bigger and better.”

Evaline Foster said she and her husband would have normally been asleep at the time of night when the fire occurred, but this night they were having a New Year’s Day dinner with Evaline’s brothers.

She said her husband began to smell smoke, but the family was not particularly alarmed at the time.

“It wasn’t like a black smoke,” Evaline Foster said. “It was like you would light a candle. That’s the only aroma we got.”

But soon, James Foster sensed that something was wrong. He noticed, Evaline said, that the outlet his phone was plugged into was giving off an unusual amount of heat.

Only when he and Evaline’s brothers then went outside and around to the back of the house did they realize the sheer gravity of what was going on.

By the time the fire department arrived on scene, the utilities room was fully engulfed.

Evaline said she was outside watching with horror until her neighbor, Johnny Brown, came to her aid and asked her to go inside his residence with his wife, Gerri Brown.

“They didn’t want me to see it,” Evaline said.

That action was emblematic of a community that has supported the Fosters through a trying time.

“It means a whole lot to me and my husband. The community, people who we know and people we don’t know, are coming to our rescue right now.”

Evaline Foster said the couple was covered by insurance but is still in need of assistance.

“We don’t have a clue as to how much it’s going to cost to rebuild,” she said. “We’ve never been through anything traumatic like this … my prayer is that it will cover the cost and not leave us in a whole lot of debt.”