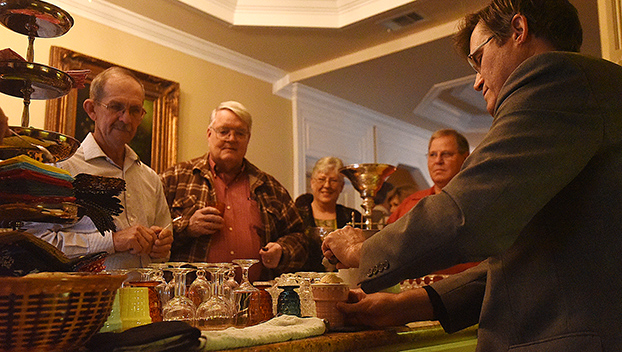 NATCHEZ — Patricia White Hardee was beautiful, but her family and friends would tell you, she was so much more.

On what would have been her 84th birthday, more than approximately 50 people piled into her house on Orleans Street to celebrate her life with what they believe to be the most fitting tribute: an ice cream social.

Hardee, a Baton Rouge native who spent her last 10 years of life in Natchez, became well-known on the national stage as a model and actress.

Here in Natchez, however, she became known before her death in October for her kind spirit and her weekly, themed ice cream parties.

The tradition of the ice cream social on Orleans Street dates back to when Hardee and her husband, Larry Hardee first came to Natchez.

“We didn’t know anyone and we had these two director’s chairs we would sit in on the front porch,” Larry Hardee said. “People came walking by and would stop to talk. One day, Pat asked someone who had stopped by if they’d like some ice cream.”

“We chose Sundays,” he said.

Sunday, for the Hardee’s, is a special day.

Sunday is the day on which Larry and Pat had their first date — they met in a ballroom dance class they shared — the day on which their house was filled each week with sweet treats and friends, and, last Sunday, it would have been her birthday.

“Everyone was invited,” said Anne White, Pat’s sister. “And if you came once, you were welcome to come any time you’d like.”

All evening long, White said, Pat would sit in the kitchen, scoop out ice cream and chat with visitors.

“It was wonderful, what Pat and Larry did,” said Betty Dossett, a longtime friend of Pat. “She had this gift of making each person feel special. When she was talking to you, she was talking to just you, no matter who was around. She was such a bright spot in my life.”

The parties were elaborate: each had a theme, music to accompany the theme, four ice cream flavors to match and an intricate set of rules.

No one was allowed to use the same ice cream cup or spoon twice.

For each round of sweet treats, one must choose a new glass and utensil.

One must never mix ice creams. The flavors were homemade and by Pat’s own design — and they were not made to be altered.

No other foods could be served. No cakes, no cookies, no toppings.

The bandannas provided on the kitchen counter were to serve as napkins and though it was not one of the rules, it was implied that you chose a bandanna that matched your outfit.

All the rules were kept in place at Sunday’s social, though the crowd was much larger than any of the weekly events.

As men and women meandered around the halls, they spoke of Pat, and of all she had done and what she meant to them.

Perhaps most well known for her acting career, Hardee was a model for a number of corporations, television shows and businesses such as the Boston Globe, Revlon and Christian Dior among others.

More so than her accomplishments, people from as far away as Massachusetts and as close as next-door neighbors talked about her intense love for others as a pianist played Pat’s favorite music on the piano forte.

“You would think with all of her accomplishments and interests that she couldn’t also be a good mother,” said Diana Cerutti, Pat’s daughter. “But she was. She was such a good mom.”

Cerutti said she sometimes fears her mother’s beauty overshadows her other qualities — her kindness and grace, generosity and selflessness.

“Mom was smart, super creative, always busy, multifaceted and funny,” Cerutti said. “And she also happened to be beautiful, as a side note.”

Walking among so many people who knew Pat not as the model but as a friend, Cerutti said she began to see that people appreciated her mother for what she was.

“She was an ice cream angel,” Cerutti said smiling with her brother, Marc Cerutti.