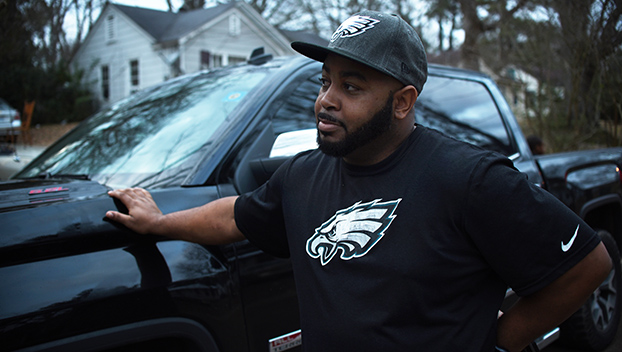 Travis Tenner talks about his love of the Philadelphia Eagles Thursday night. Tenner was picking up his children on North Circle Drive to take them to basketball practice Thursday. (Nicole Hester / The Natchez Democrat)

NATCHEZ — No one will ever convince Travis Tenner to be anything but a Philadelphia Eagles fan — not even his mother.

When the Dart landed on North Circle Drive in Roselawn Subdivision Thursday, Tenner was proudly wearing his Philadelphia Eagles apparel while picking up his boys for basketball practice.

Tenner said he has been an Eagles fan since 1994, even though everyone else in his family roots for another team.

“My Mom wanted me to be a (Dallas) Cowboys fan, but I just couldn’t do it,” Tenner said. “She bought me Cowboys stuff to put on my bed when I was a child.”

But Tenner said he knew where his allegiances were. Tenner went out and bought his deer hunting inspired bed linens instead.

“She tried to put it on my (older) brother’s bed, but ended up giving it away because he is a New Orleans Saints fan,” he said.

Tenner’s love for the Eagles began when he was into playing the football arcade game Tecmo Bowl on his Ninetendo console. At the time, Tenner said he needed a versatile quarterback and Philadelphia All-Star Randall Cunningham was available.

“I fell in love with the Eagles ever since and I never have — never will — change,” he said.

Tenner’s wife Joanna said Travis must be the No. 1 Eagles fan in the area, maybe even the biggest fan period.

“You should see our house,” Joanna said. “He has Eagles blankets, Eagles pillows. He even has me wearing an Eagles shirt and I am not even crazy about football.”

With Philadelphia’s first ever Super Bowl win on the line Sunday, Travis said he is confident his team will prevail Sunday night.

“As long as the defense shows up we will be fine,” Travis said. “We need to beat the referees too.”