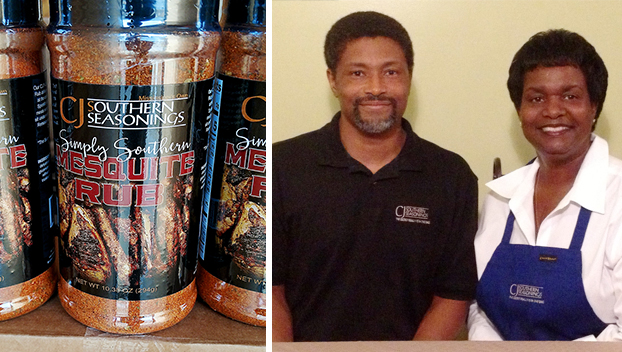 Natchez natives Cedric and Joan Anderson, below, began selling their Southern fried catfish from a food truck in San Antonio, Texas, in 1999. The couple has recently expanded and launched their own barbecue rub. (submitted photos)

NATCHEZ — Cedric and Joan Anderson, both Natchez High School graduates, now living in Hattiesburg, have been using their own handpicked seasonings for recipes in their catering business for nearly 20 years and the seasonings are so popular they decided to launch their own barbecue rub — C.J.’s Simply Southern Mesquite BBQ.

The pair has been in business together as C.J.’s Southern Seasonings since they catered in San Antonio.

In 1999, they gained popularity with a mobile concession trailer that sold their signature fish fry.

“We coined the phrase, ‘The secret really is in the bag,’ and it is,” Joan Anderson said, adding that their products come ready-to-use straight from the bag or — in the case of the Mesquite BBQ launched last week — bottle.

All the user needs to do is add the product to their favorite food and the seasoning will add a burst of bold Southern flavors without any additional preparation, Anderson said.

Their food truck became too much to handle, Joan Anderson said after she was left alone when her husband joined the military, but customers still asked for their products, especially on social media.

“We gained over 1,100 customers on Facebook,” Joan Anderson said, adding a thanks to her “secret sharers,” who try C.J.’s products and tell their friends about them.

The business has flourished first on Facebook, online through Hammett Enterprises, and now in nearly 200 supermarkets across Louisiana, Florida, Oklahoma and Indiana.

Joan Anderson said C.J.’s contracted with her daughter from New Orleans, Krystin Anderson of LO3 Photography, to take professional photographs of their products for marketing purposes.

“I always like to give credit to those who allow our business to soar, because without them it would not be possible,” she said.

“We did a year-and-a-half-long testing with it at Mayders & Tayders to see the customers’ feedback,” Joan Anderson said. “We finally got the recipe down … and we’re rolling it out to the market now.”

The product will soon be available in Natchez, Ferriday and McComb markets and will be sold online effective this week at cjssouthernseasonings.com.

Joan Anderson said she and her husband keep close ties to their Natchez home where their success began.

“We come to Natchez often,” she said. “We do demos at the Natchez Market. … When we make deliveries, we meet with our customers and friends.”

Orders can be made at cjssouthernseasonings.com.

‘An honor to own it’, New Malt Shop Owners to continue tradition