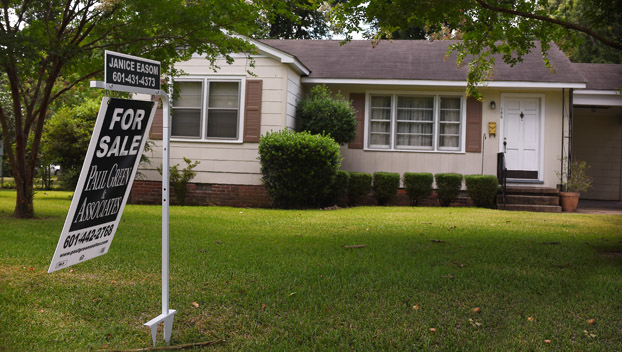 A sale sign sits in front of a house on Laurel Avenue Friday in Natchez. Nearly 400 houses are currently listed for sale in the Miss-Lou and realtors say they are seeing signs of improvement in the market. (Nicole Hester, The Natchez Democrat)

NATCHEZ — Natchez and the Miss-Lou appear to be a homebuyer’s market, at least judging by the number of real estate agent signs in the front lawns of what seems to the casual observer to be every other house.

Indeed, a look at the Multiple Listing Service inventory supply chart of the Natchez Board of Realtors shows the number of single-family houses and mobile homes listed with real estate agents on the Miss-Lou market is high.

“Historically, we are up as far as our inventory,” said Butch Stewart, owner-broker of Coldwell Banker Stewart Realty of Natchez.

As of July 1, the number of houses on the market was 397 including Natchez, Adams County, Concordia Parish and surrounding areas. As of Dec. 1, 2017, 322 houses were on the market.

Over the past four years the total number of listed houses has seen little fluctuation. Here are the totals for the month of December each year going back to 2011:

That spike in the housing market coincides with the drop in oil prices that same year — dropping from $85.60 per barrel in 2014 to $41.85 in 2015 — noted owner-broker Glenn Green of Paul Green & Associates Realtors of Natchez.

Green said the oil exploration business had brought a housing boom in the 2000s and when the price of oil made the dramatic drop, people moved out of the area.

And while Green acknowledged the area is a buyers’ market, he added, “You’ve got to have buyers, so it doesn’t matter how many properties you have available.”

Green said he does not believe the housing market will change until jobs are created.

“It comes down to creating good paying jobs,” Green said.

Stewart said higher-end houses are staying on the market longer than houses in the median price range of $99,300, according to U.S. Census data, which he said are selling as usual.

“Downtown, there are a lot (of higher-end houses) down there,” Stewart said. “We don’t have enough half million (dollar) buyers, so we have more on the market than we are selling. In my opinion, some houses are just overpriced, and it just skews our market; and they have been on the market for a long time.”

Stewart said he doesn’t see the housing market changing until new people move to the area.

“What we need is people to move into town,” Stewart said, adding a lot of the local house sales are among people who are already within the community.

“When the bottom fell out of the oil market, that had a huge effect on us,” Stedman said.

“No question, we have a higher number of houses on the market than usual,” Stedman said. “Real estate is like everything else. It is cyclical.”

Stedman noted that after Hurricane Katrina in 2005, buyers moved to the area and bought up a lot of the housing inventory.

“Our number of listings cut in half,” Stedman said of Katrina’s effect on the market. “It absorbed a huge amount of our market, but a lot of those houses have gotten back on the market as people have moved back or moved on for whatever reason. Things are cyclical, affected by the national economy, and we run a little behind it.”

Stedman said she sees some bright spots on the horizon.

“Our activity has gone up tremendously in the past three weeks,” Stedman said. “Look at oil prices.”

Indeed, oil prices have ticked up in recent weeks reaching $75.25 per barrel on Friday afternoon, which is at the price point — between $70 and $80 per barrel — that local economic leaders say would make oil drilling viable in the Miss-Lou again.

In addition to the oil prices, Stedman said the strong national economy is helping spur interest in the housing market, and she said a couple of new business announcements in Vidalia, including Syrah Technologies and Project Blue, which is expected to bring 300 jobs to the area, helped spur house buying interest.

“We have a buyers’ market, right now,” Stedman said, adding interest rates are still relatively low. “If volume of sales continues to improve as it seemingly has in the past 30-45 days, it could turn from a buyers’ market to a sellers’ market pretty darn fast.”

Stedman also said the actual numbers of houses on the Natchez market, which according to U.S. Census figures has 6,315 residential households, is not as high as it seems when you remove the surrounding areas.

26th annual Flotilla in Ferriday was fun for all

Though rain threatened the day, the clouds held back long enough for more than 30 boats to parade around the... read more