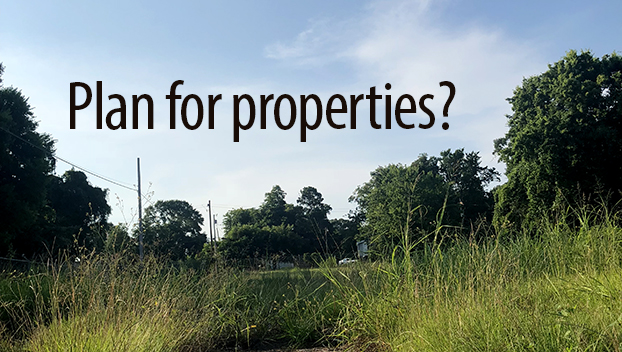 Sunday focus: More than half of city-owned properties comprised of abandoned, vacant lots

NATCHEZ — The City of Natchez owns 162 individual parcels of land including rights-of-way and those housing buildings such as City Hall and the Natchez Visitor Reception Center.

A little more than half of the city-owned properties — 89 to be exact — are variations of small strips of land or vacant lots.

“That is a result of when they were private land, and they had delinquent property owners,” said City Planner Riccardo Giani. “Through years of adjudication and tax things, the city had to recoup those properties in lieu of payment on property taxes.”

When property owners fail to pay property taxes for a certain length of time, the properties go to the state, said Natchez Mayor Darryl Grennell. Then, the state turns around and gives the properties to the local city or county government in which it is situated.

Giani said the city maintains the properties out of an obligation to set a good example of following city codes concerning property maintenance.

“We have to use public works and they go in and cut the lots to keep the grass a certain height,” Grennell said. “It helps to reduce vermin in the area. One-hundred-sixty-two properties is quite a bit of work, as where public works energy could be focused on other highlights of the city.”

Public Works Supervisor Justin Dollar said the city does not know exactly how much maintenance and upkeep of the properties costs the city, because it all falls under the Public Works Department’s $1.1 million budget.

City officials agreed they would rather not have to own and maintain so many properties.

“I think we all are in agreement that the city should only own buildings that they operate out of because the city really shouldn’t be in the business of real estate,” Giani said.

While the city is not in the real estate business, Grennell and Giani said the city is willing to hear out potential buyers for any of the city’s lots.

Throughout his tenure in Natchez, Giani said he has gotten a few inquiries about available lots here and there, yet interested parties often back out when they see the property.

Although the city hasn’t had luck in selling all of its vacant lots, Grennell said he has an idea on how to get them off the city’s hands: sell them to adjacent property owners.

Grennell said when he was growing up, his parents would buy properties adjacent to theirs to keep others from building next to them.

“They would basically add onto their yard and create a bigger green space, which I am 100 percent in support of,” Grennell said. “It helps to reduce city spending money on maintaining these particular properties. My view on these vacant lots is if there are interested parties in construction of dwellings and other endeavors that want to add on to their lot and grow their yard space, I’m willing to go through the process of selling to those property owners. A continuous property would be the best option.”

Although the vacant city lots cost the city money to maintain, they are not the only city-owned properties putting a dent in the budget.

The former Titan Tire facility and the Natchez Visitor Reception Center are the only two buildings Grennell said he knows of that the city is paying for security to guard.

City officials recently revealed the city is paying approximately $80,000 a year to provide security for the former Titan Tire facility.

“I know with the visitor center, we pay (approximately $30,000 per year) for security but that is only night security,” Grennell said. “Since the tire plant has been in the city’s hand, since a little over a year ago, we had to secure it to keep people from going in there and trashing up the place. It has been a burden because I believe we have to pay $80,000 to secure that place. We weren’t really prepared for that during the fiscal year.”

Just like the lots, though, the city is trying to get the ownership of these two properties off its hands. Grennell said the city and Titan Tire are in litigation to try and figure out who should own the plant and that the Natchez Visitor Reception Center is currently in talks about being given to the National Park Service.

Giani said the city owning so many vacant lots and strips of land is not affordable and he hopes prospective buyers come forward soon.

“Obviously, it’s better to have private property owners own these properties, because it goes on the tax rolls and the city generates money off of those taxes,” Giani said. “Selling the properties would go a long way.”

On the Menu: Annual Food & Wine Festival set for Aug. 3-5