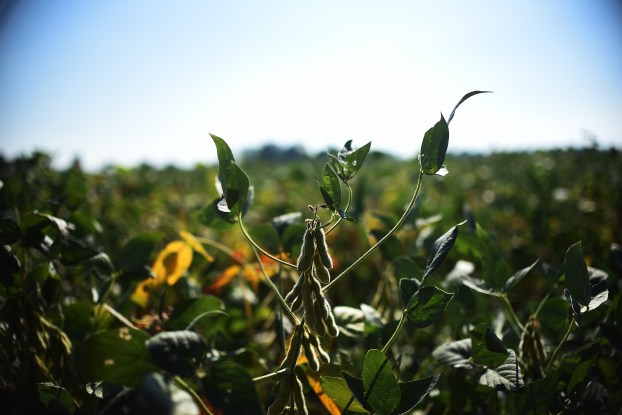 Soybeans such as the ones pictured here Soybean plants grow in the fields off Carter Street in Vidalia, are a major crop for the Miss-Lou and a trade war with China could hurt this year's harvest. (Nicole Hester, The Natchez Democrat)

$12B subsidies will benefit Miss -Lou

NATCHEZ — Area soybean farmers caught in the middle of United States’ tariff disputes with China might see some relief from $12 billion in aid announced Tuesday by the United States Department of Agriculture.

That relationship, which benefits farmers in the Miss-Lou, however, has growing tension after China imposed tariffs earlier this month on $34 billion worth on U.S. imports — a retaliation to the United States tariffs of the same amount on Chinese goods.

“China is by far our biggest customer,” Guidry said. “They buy almost 60 percent of our soybean crop. Our second leading buyer only purchases 5 to 7 percent of our crop.”

On Tuesday, the Department of Agriculture said it would make up to $12 billion available in short-term aid to farmers adversely affected by the tariffs, as the U.S. negotiates new trade agreements. Guidry said farmers do not know exactly how this aid will be allocated, but it more than likely come in direct payments, the government buying surplus crops, and a program to create new export markets for America’s farmers.

That announcement has one local farmer excited.

“My first impression is that we have a sitting president that is worried about our American farmers, who knows who we are but also knows our struggle,” said Noble Guedon, who farms 500 acres in Concordia Parish with his wife.

Although Guedon said he is pleased with the aid package, he knows it is short-term relief to a potential long-term problem.

“This pay package is a temporary offset that covers something that has tremendous potential impact on this area,” said Chandler Russ, executive director of Natchez Inc. “It will be something that will be very helpful for these farmers in the Miss-Lou. Now it’s important to remember it’s only temporary, but it will help offset any losses that may occur during this growing season.”

Soybean prices suffered a $2-per-bushel dip since April’s prices and even experienced the lowest price in nine-years this month.

Currently, soybeans have risen back to $8.75. However, Guedon said he and other local farmers have not been truly affected by the tariffs, because they contracted their crops when prices were high three months ago.

“Most of my production was contracted back in April when it was higher,” Guedon said. “A lot of farmers I know got prices that secured their production earlier this year before the tariffs came into play.”

Guedon said he is not overly concerned now, but later this year and next spring, he might be if the prices are still hovering at $8.75 per bushel or lower.

Guidry said China typically buys soybeans from the United States from October to January because that is when the U.S. is done harvesting, and Guedon said farmers like to contract their crops in the spring.

“If we don’t see any activity during that time of the year, that’s definitely going to add some concern,” Guidry said. “If we roll into December and January worrying about our new crops and prices are still like this, then we can be worried,” Guedon said.

Guedon and Guidry both said they believe the market will shake out soon.

“The market has kind of overreacted and is still trying to figure itself with these tariffs,” Guidry said.

Yet the fear of losing China is still in the back of Guidry’s mind, he said

“If we lose China, it’s going to affect markets for years to come,” Guidry said. “We don’t know for sure what is going to happen with these trade tensions. There is concern. We are going to prices where soybeans are unprofitable for these farmers to produce. That is definitely worrisome.”

And if that happens it would have a significant  impact on the Miss-Lou.

“If these tariffs do become a long-term problem, throughout multiple growing seasons, you will have some negative around the nation and in this area,” Russ said.

Democrat telephones will be temporarily out of operation from noon to 12:30 p.m. today

Note to our customers: The Natchez Democrat office will be conducting telephone maintenance from noon until approximately 12:30 p.m. today... read more