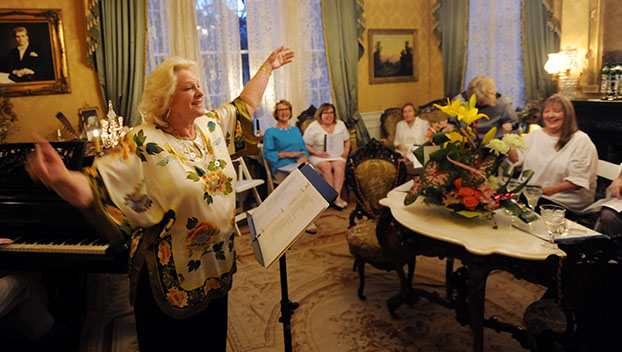 Ginger Hyland directs an impromptu chorus of singers in a summer rendition of the popular Christmas song, “The Twelve Days of Christmas” during Saturday night’s White Linen Night fundraiser for Christmas in Natchez. (Ben Hillyer / The Natchez Democrat)

Christmas was in the air for fundraiser at Towers

NATCHEZ — Christmas is still five months away, but The Towers was aglow with the wintry white holiday spirits Saturday night.

The Towers was decorated with Christmas lights and ornaments while guests flocked in — all of them dressed in snowy white garments — for a fundraising event for Christmas in Natchez.

Ginger Hyland and her husband, James, welcomed people into their house for a White Linen Night, one of many fundraising endeavors for Christmas in Natchez to both revive and supply Christmas decorations for the holiday season in Downtown Natchez.

Ginger Hyland said she started the Christmas in Natchez committee with the Natchez Chamber of Commerce president, Debbie Hudson, about 10 years ago.

And Saturday night’s fundraise was simply an extension of that project.

“The whole idea was to do something in the summertime to remind people about Christmas because we needed to fundraise so we can improve the decorations downtown,” Hyland said.

She said the committee has raised approximately $100,000 since it was founded.

Tickets sold for $40 per individual and $75 per couple. With that, guests enjoyed food, wine, and ambient music while socializing in an antiques-filled antebellum house.

The Towers antebellum house made USA Today’s list of the Top Ten Most Unusual Christmas Displays in the United States for its unique and glittering indoor Christmas display and Hyland said she has been adding to her seasonal and antiques collections for more than 45 years.

Guests at The Towers could also see the newly added tower on the left side of the house. The architect, James Germany, said he and his three other craftsmen — Danny Craft, Eddie Butler and Alton Jones — have worked since April to recreate the house’s namesake that burned down in 1927.

“Everything went up by hand,” Germany said.

Germany said he used a picture of the original structure to scale and draw a blueprint of the missing towers.

Construction on the second tower will resume this fall with hopes it will be finished by Christmas, he said.

Attendees of the party also had the opportunity to participate in a silent auction of donated goodie baskets and a three-night stay at Orange Beach.

Hyland said Christmas in Natchez starts the Saturday following Thanksgiving and lasts through the New Year holiday. The Christmas decorations in Downtown Natchez are important for a lot of reasons, she said — both spiritual and economical.

“Decorations contribute to how Christmas makes you feel,” Hyland said. “It’s a very spiritual time, too, and it all ties in together. (The decorations) are also important because … the last four months of the year are the biggest time for sales. … We need to beef up Christmas so (the city) does better. When the city does better, everyone does better.”

NATCHEZ — For Griff Toney the best part of beekeeping is simply the work itself and learning more about... read more