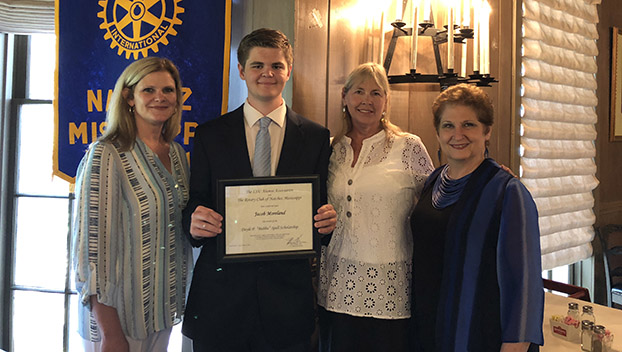 Jake Moreland, a recent freshman and microbiology major at LSU, was honored during a Rotary Club awards luncheon Thursday, where he received the Doyle P. Spell Scholarship to LSU, worth $1,000 per semester.

“I’m 100 percent convinced that we’ve made the right choice, and I wish (Moreland) well at LSU,” Hungerford said.

Moreland said the scholarship, designated for an Adams County or Concordia Parish student, requires a minimum ACT score of 28 and a 3.0 GPA, which must be maintained with a full-time student status at LSU.

Moreland said he is passionate about science and research and wanted to use that passion to help people. He plans to study microbiology before continuing his education in pathology.

“Microbiology is one career path … I’ve thought about since middle school,” Moreland said. “The main reason why I want to be in the science realm overall — I thought it was the most enjoyable and the best way … I can contribute to the good of a lot in the world. It gives me a chance to make discoveries and make a difference in the world.”

Moreland said he plans to use the study to perform research tasks that could potentially lead to cures for diseases. Meanwhile, he’s helping others by doing what he loves, he said.

“My favorite subjects in school were science and math, but I’ve never wanted to be a mathematician,” Moreland said. “I’ve always wanted to do research and help people. … In this field, you can diagnose and help people know what’s wrong with them while still doing the research tasks.”

Moreland, who is the son of Connie Terry and David Moreland, said he started moving into a dorm at LSU this week and has already gotten a head start on his classes.

Moreland also won district literary rallies and participated in state rallies throughout his high school years. He was valedictorian, senior class vice president and freshman class president at Monterey High School and was involved in the Natchez community through mission trips with the Jefferson Street United Methodist Church.

He worked as a volunteer with the Ferriday animal shelter, Concordia PAWS and was a member of the Monterey Church of Christ worship band as a drummer for two years.

“I want to thank my family for supporting me throughout my childhood and thank the Natchez Rotary Club,” Moreland said. “A lot of them have been around me since I was a toddler, supported me and watched me grow up.  They help me build relationships with people in the community and were a critical part of where I am today. I’d also like to thank Ms. Mary Ann and Mr. Bubba (Doyle) Spell for the scholarship.”