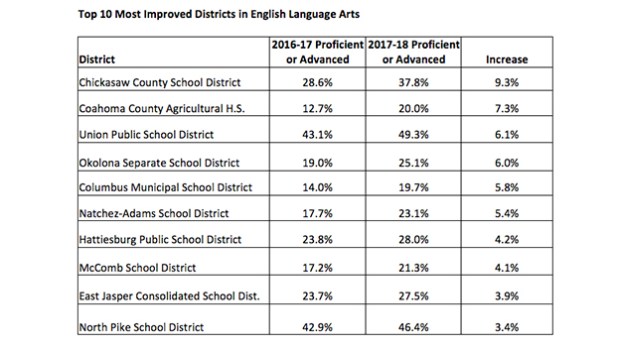 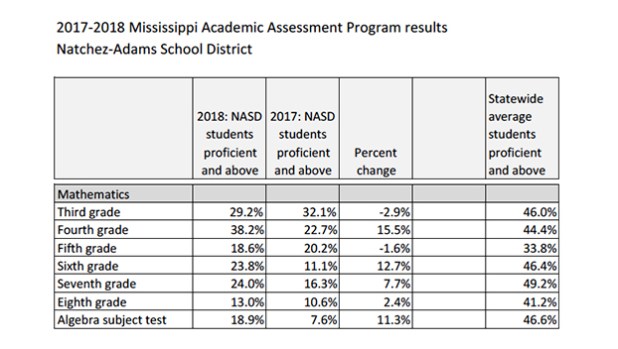 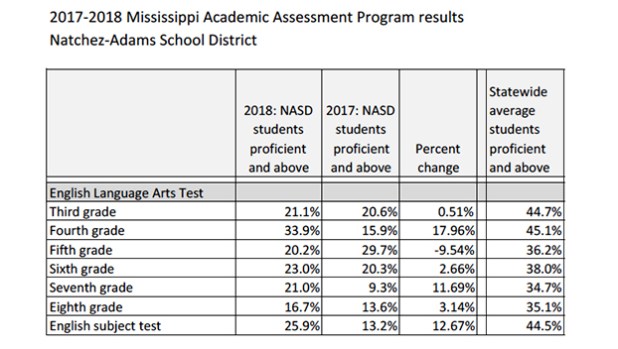 The Mississippi Department of Education said the Natchez-Adams School District was one of the 10 most improved school districts in the state on the English portion of the test.

“As a district, we are elated to see our efforts positively impacting student achievement,” said the Natchez-Adams Superintendent Fred Butcher. “Our main focus is on the academic progress and improvement of the students we serve.”

Each year, the state requires students to participate in the Mississippi Academic Assessment Program. This annual test measures student performance in English language arts and mathematics in grades 3-8 and English II and algebra in grades above the eighth grade in school districts across the state.

Test results are divided into five levels. Students scoring in the top two levels are considered proficient or advanced in each subject test.

The Mississippi Department of Education considers students scoring in the top two levels as meeting or exceeding grade-level expectations.

On the English portion of the test, the number of Natchez-Adams students performing proficient and above increased by 5.4 percent, from 17.7 percent in 2016-2017 to 23.1 percent in 2017-2018. Only five other school districts in the state showed greater improvement.

Butcher said the results can, in part, be attributed to strategies the district is continuing to implement that target students’ needs.

“The increases that we have experienced in student achievement have been the result of a number of strategies,” Butcher said. “For the last two years, the district has realigned its curriculum throughout the district to ensure that students are receiving high quality, rigorous instruction no matter the school he or she attends. The district’s curriculum team has worked with teachers to model effective lessons, provided instructional resources and have developed assessments. Most importantly, we have continued our use of student data to determine the needs of our students as a whole and individually. Students are receiving more targeted interventions to meet their individual learning needs.”

Similarly, the Natchez-Adams School District also showed improvement on the math portion of the test.

“We are excited about the improvements but we know that more work is yet to be done,” Butcher said. “Our secondary schools continue to struggle in some academic areas. This year, we have made some personnel changes in order to provide more strategic focus in those areas.”

Statewide, students made gains in 11 out of 14 tested grades and subjects.

“With short-term wins and continued growth of the accountability levels of our schools, employee morale, confidence and determination have increased,” Butcher said. “For the first time in several years, the district is fully staffed with more certified teachers in the classroom and especially in the core, instructional areas. Our theme has been ‘focused with no excuses’ and we see employees who are working on that foundation. We are willing to do what it takes to see our students achieve and our district improve. School improvement is not an overnight process, but we are committed to continuous improvement.”