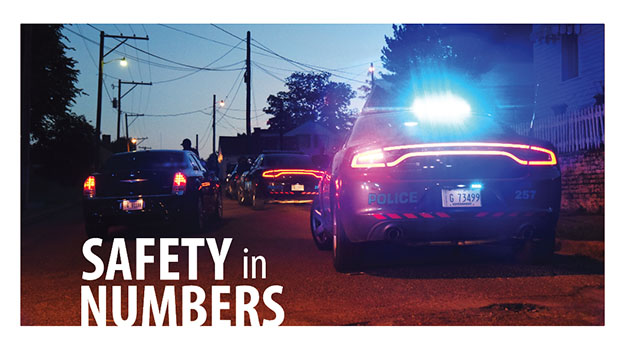 “It is difficult filling the rank and file in Natchez,” Armstrong said.

The Natchez Police Department is budgeted for 46 officers, Armstrong said, and the department currently has 35 of those positions filled.

Factors leading to the difficulty in hiring and staffing in the department, Armstrong said, include:

Inherently, law-enforcement work is dangerous, as officers must respond to all kinds of situations, including traffic stops, domestic violence and drug offenses to name a few, and Armstrong said most officers want to be adequately compensated for the work.

Even a veteran officer coming into Natchez’s police force with 15 years experience, Armstrong said, would be hired on at the starting base pay of $13.03 per hour.

Natchez Mayor Darryl Grennell said recruitment and retention has been an ongoing problem for the city since before he and Armstrong came along.

“One of the things I did last year,” Grennell said, “and the board supported 100 percent, is 4-mill increase to go to police officers but also the fire department, because they have the same challenge there.”

Grennell said Armstrong and he have met several times and have come up with creative ways to provide incentives for officers by paying them more for attaining academic degrees — associate, bachelor’s and master’s.

“I recently spoke to the chief … on creative ways of trying to provide increases in the upcoming year,” Grennell said. “For instance, taking some of the slots not being utilized in the city and using the money to raise remuneration rate for the officers.”

In the meantime, however, the Adams County Sheriff’s Office has been stepping in to help the city.

Adams County Sheriff Travis Patten said deputies help the city by responding to calls in the city and helping with investigation.

Patten said his office has logged 300 hours in overtime in the past three months, which he said could largely be attributed to helping the city, which he is happy to do because Natchez is part of Adams County.

In addition to the county helping the city respond to incidents and conduct investigations, the county also houses city jail inmates via an agreement between Natchez and Adams County, which Armstrong said is working well and frees up his staffing and budgets rather than the two organizations operating separate facilities.

Both Patten and Armstrong said they would be open to the possibility of further collaboration within the two agencies.

Armstrong said he has a standing invitation to sheriff’s office deputies and any accredited Mississippi law officers to work part-time with the city.

“So far I have not gotten any takers on that and went before the board several months ago and got permission, and we do have that option. If a sworn officer wants to work for the City of Natchez, all they have to do is come over and fill out an application to work part time on an hourly rate.”

Staffing is not an issue with the sheriff’s office, Patten said, and the office is fully staffed with approximately 40 sworn officers, including command staff, deputies, narcotics, investigators, road deputies and sworn officers, who can make arrests.

The base salary for the sheriff’s office, Patten said, is $16.01 per hour.

“I actually don’t have a single opening right now,” Patten said. “Not one. I had some leave for different reasons, mostly because they got married and spouses wanted to live somewhere else or lost them to retirement.”

Patten said he has a waiting list — “six binders, 3 inches thick” — of people who want to work for the sheriff’s office.

“We have given the entry level exam five times in the past year and a half,” Armstrong said. “The net gain for officers is three.”

Armstrong said 16 people picked up application packets, 15 turned them back in. Of that 15, only eight came back for the test, and only three passed the test. Of that three, one did not pass the physical agility test, which includes a 1-mile run, push-ups and other physical requirements. Of the two left, one dropped out and one is waiting to go the academy.

The training academy holds sessions only three times a year, Armstrong said, and the city sends new recruits to the training academy after they have passed preliminary tests, pays 12-weeks of tuition at $3,600 and all expenses incurred, including mileage for traveling and wages and then 12 weeks for field officer training after that at an estimated cost of $12,000 to the city.

In a few instances, Armstrong said the city has invested in new recruits and had them take another job for a better wage shortly after they’ve completed the training at the city’s expense.

A competitive wage might lessen the chance of such incidents, Armstrong said.

State law 45-6-13, however, Armstrong said, requires that any Mississippi governmental entity hiring away another Mississippi law enforcement agency’s recent hire must reimburse the agency up to three years after the training for a percentage of the training expenses of that recruit.

Armstrong said he has one request out for reimbursement from the Adams County Sheriff’s Office for one of his recent recruits who took a job at the sheriff’s office after 13 weeks at the police department, 12 weeks of which were the field training officer period.

Those are the only two police officers who have gone to the sheriff’s office in recent months, Armstrong said.

“I know we are facing stiff challenges with manpower,” Armstrong said. “You have to have the manpower to do the job. To my officers’ credit, they are doing a good job.”

Patten said his deputies must go through the same training and testing as municipal police officers.

“Municipalities have different rules,” Patten said, “because of civil service in the city.”

Under the county system, however, applicants must also go through a screening panel, and that enables the panel to make “more of a judgment call,” Patten said, on “a person’s will. That interview board helps us see a person’s will or desire to learn and that comes with whatever skill sets they have.”

Meanwhile, Armstrong said he plans to propose a pay increase for officers in the city’s upcoming budget.

“I know it is difficult in today’s economy in Natchez, but the board was gracious to give us a 7-percent raise a year ago, body cameras and purchase used vehicles. The current administration is working very well as it relates to our needs and staffing in the police department.”

NATCHEZ — For the last five years Karla Brown has made it her job to find a hole and... read more