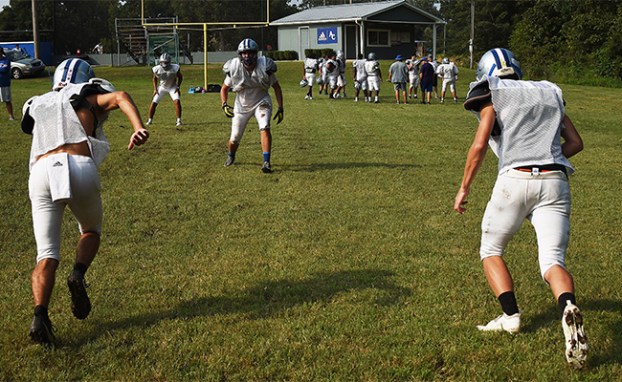 After strong thunderstorms forced the Rebels to cancel last week’s season opener after halftime, King said he is being more conscious of safety factors more than ever.

“We wanted to finish the ball game, and you hate it because we weren’t the whole game in,” he said. “We tried to wait as long as we could but the lightning was not leaving.”

While King said last week was not his favorite way to start a season, he’s looking forward to continuing with high hopes this week when the Rebels travel to St. Aloysius.

Kickoff is set for 7 p.m. Friday in Vicksburg.

The Rebels ended last week’s shortened game with a 20-14 lead over Central Hinds Academy. As they prepare for the Flashes, King said he is doing his best to watch the weather.

“It’s been really hot recently, stifling,” he said. “We didn’t get as much in as we thought we would early in the week because of the heat.

“These kids end up as your family and you have to really care for them. The old-school mentality of running these kids as hard as you can is kind of out the window. There’s too many negative things that can happen, so we are trying to be careful.”

Over the years, King said he has seen a shift in how health has taken the forefront in sports.

“We don’t do some of the tackling drills we did when I was a younger coach,” he said. “Actually, the game has changed in a lot of ways. In earlier days, the toughest team would usually win. You tried to gear your team to physically wear people down. Now it’s a little bit more of a finesse ball game.”

Adding a spread offense is used more frequently in recent years, King said the game is still meant to be played with grit and power.

“It’s still football, but the passing has changed the game for sure,” he said.

“They are extremely excited to play this week,” he said. “This will be a good test for on the road early.

“Even though we don’t have very many, they are very healthy.”

Franklin County (0-1) hosts Seminary for a Week 2 game in Meadville at 7 p.m. Friday.

Cathedral also had a shortened game last week after its game got canceled after just one quarter of play. The Green Wave are on the road in Week 2 and are set to play its district opener at Central Private at 7 p.m. Friday.

As each inning went by, the chances for Adams County Christian School to register a hit became slimmer and slimmer.... read more