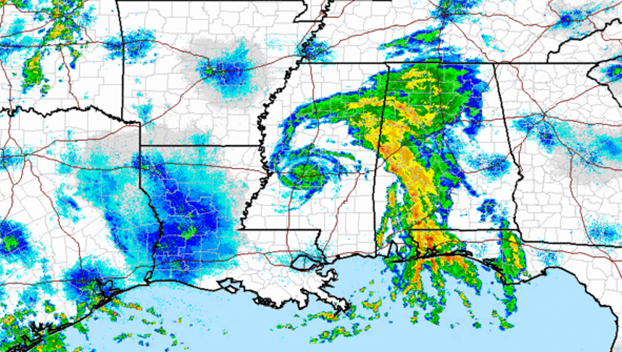 From The Daily Leader

BROOKHAVEN — The weather is fine and sunny in Virginia Beach, Virginia, today.

A nice, little 5 mph breeze blowing out of the northeast will fan across bright, blue skies, free from rain, with temperatures in the mid-80s. The Old Dominion is enjoying fair weather because of a high-pressure system sitting in the middle of the eastern seaboard, pushing turbulence away.

That system is also why Tropical Storm Gordon yanked off its track late in the night of Tuesday, taking a northward turn up through eastern Mississippi and missing Lincoln County entirely.

“Tropical Storm Gordon was moving west beneath that high pressure, and once it got farther west it was able to turn back up where the high-pressure ridge wasn’t so dominant,” said Thomas Winesett, a meteorologist with the National Weather Service in Jackson. “Tropical systems are always trying to find a way to get north. If there’s a ridge of high pressure blocking them, they’ll keep sliding west until they can find a way to move north.”

Tropical Storm Gordon found the alley late Tuesday night when it made landfall near the Alabama-Mississippi state line, farther east of a predicted track that originally had the storm’s eye making a dead-center approach over Brookhaven.

Instead of following the predicted course across Southwest Mississippi, Gordon began churning north-northeast, taking its hard rains and stiff winds up through the Pine Belt region and, as of 8:30 a.m. this morning, right over Jackson.

Revised forecasts call for Southwest Mississippi to receive light rain throughout today  and into the afternoon as Gordon’s belly slides by 50 miles north, but any threat of serious weather here ended during the night. Winds may pick up to 10-15 mph, Galey said.

But like everything else with Gordon, even that’s not certain.

“Y’all are far enough south that any impacts down there should be relatively minimal compared to other parts of the state,” Winesett said. “Confidence is lower down there for another band to develop, but it’s not entirely out of the question to see localized heavy rainfall later.”

Winesett said Gordon — now weakened to a tropical depression with sustained winds of 35 mph — will bring heavy rains and flash flooding to the Delta as it moves northwest at 14 mph, and it’s main eastern arm is currently spinning off over the I-20 corridor, bringing storms on a line stretching from the Golden Triangle down to Pensacola, Florida. The band will drag into eastern Mississippi as Gordon heads west, he said.

NWS forecasts call for the storm to weaken to a post-tropical state by 1 a.m. Friday, at which point the center will be over Little Rock, Arkansas, and it will eventually blow out over Missouri, with the rainy remnants carried east to the Midwest by early Monday morning.

Tropical Storm Gordon was near hurricane strength when it made landfall Tuesday night, bringing flash flooding and wind damage to coastal areas, killing a child in Pensacola after a tree fell on a mobile home.

NATCHEZ — Owners of the historic Prentiss Club building got their first look at the building Tuesday since a... read more