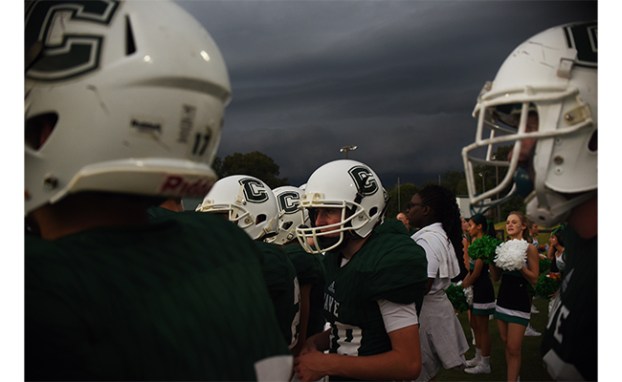 Cathedral players watch the game from the sidelines during the game against Brookhaven academy on Aug. 17. (Nicole Hester, The Natchez Democrat)

Green Wave hopes to improve with win over Amite on Friday

NATCHEZ — The Cathedral High School Green Wave will look to improve its record to 3-0 on the season when it travels to Liberty to take on the Amite School Center Rebels at 7 p.m. Friday.

Cathedral is coming off an impressive 40-0 win over the Christian Home Educators Fellowship Patriots last Friday night while Amite School Center picked up its first win of the season with a 26-13 win at Ben’s Ford Christian School.

Green Wave head coach Chuck Darbonne said practice was not affected by the Labor Day holiday, but weather was an issue last week.

“It went off pretty good (Monday). We had just two days of practice last week because of lightning. We’ll have to move practice inside (Wednesday). I think preparation-wise, we’ll be fine. Hopefully, we’ll get a few minutes outside when it’s wet,” Darbonne said Tuesday with anticipation of possible impact of Tropical Storm Gordon.

In the win over CHEF, the Green Wave put up 369 yards of total offense and only had to punt twice while its defense forced five turnovers.

“We executed better than we did against Central Private. We were able to get some young kids in,” Darbonne said.

As to what concerns him the most about the Rebels, Darbonne said,

“They play hard. They’re a physical team,” Darbonne said. “Their quarterback runs the ball well. They have a physical receiver. Defensively, they play well against the run. They’re a young team that makes a few mistakes.”

The one thing Darbonne said his team will work on this week is fundamentals.

Adams County Christian School (2-0) hosts Christian Home Educators Fellowship (0-3) today at 7 p.m. Centreville Academy (1-2) will look to get back on the winning track when it hosts Ben’s Ford (1-2) Friday at 7 p.m.

Franklin County High School (0-3) will have its hands full when it hosts MHSAA Class 1A Lumberton High School (3-0), which is coming off 32-7 win over Heidelberg. Kickoff for both games is at 7 p.m. Friday.

Football teams in Louisiana have rid themselves of first-week jitters and are ready to hit the field again this week... read more