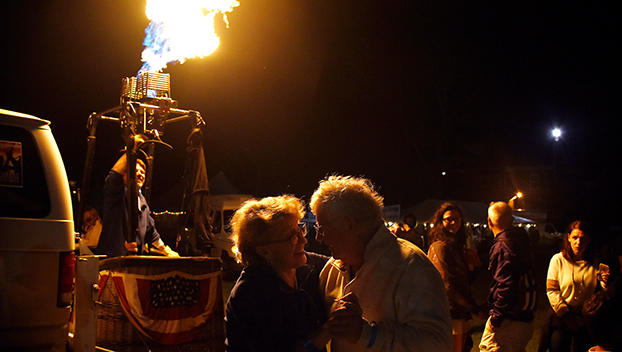 Aylett Dickman dances with Mark Griffin in the light of the flames from a balloon’s burner on the second day of the Great Mississippi Balloon Race in Natchez. Balloon’s could not inflate because of high winds, so the balloonists fired up their burners instead. (Nicole Hester / The Natchez Democrat)

Weather goes from drizzle to sunshine for balloon festival

NATCHEZ — At the Great Mississippi River Balloon Race on Saturday, Bill and Karen Awbrey listened to live music while sitting in a small spot of shade on the Natchez bluff.

The couple from Jasper, Texas, visits Natchez often, but said this year was their first time at the balloon race.

“We’ve known about it for a long time,” Bill Awbrey said. “We enjoyed last night, but we wish the weather was more October-like.”

The weather changed from an early morning drizzle Saturday to being sunny with warmer temperatures.

The festival kicked off Friday with a morning flight and continued in the evening with a balloon glow on the bluffs, followed by a fireworks display over the river.

Lena McKnight, director of the Natchez-Adams County Humane Society, was on site Saturday selling festival T-shirts from 2018 and years past, with a portion of funds benefitting the Humane Society. McKnight said she was surprised to find foot traffic was a little lighter this year than in year’s past.

“It’s funny, because the weather’s fabulous, and the music is great,” McKnight said.

Vendors were on hand on the bluff with balloon-related items such as jewelry and yard decorations. Carnival rides and games also were on tap.

Josh and Kelly Bipkins, both of Hattiesburg, were continuing an eighth anniversary marriage celebration with a trip to the festival. Kelly Bipkins said the couple was looking forward to seeing the balloons fly Sunday, but in the meantime they were enjoying music by Buku Broux of New Orleans and waiting for salsa band Papo Y Son Mandao.

Hayden Butts, 30, of Natchez, also was heading for the music stage. Butts said he looks forward to the festival every year.

Rain and wind kept the balloons grounded Saturday, but organizers said they are hopeful for better luck today.

Bill Cunningham is the race balloonmeister and leads the pilots throughout the weekend flights. Cunningham said the winds forecasted for Sunday are right on the edge of what he considers safe for launching.