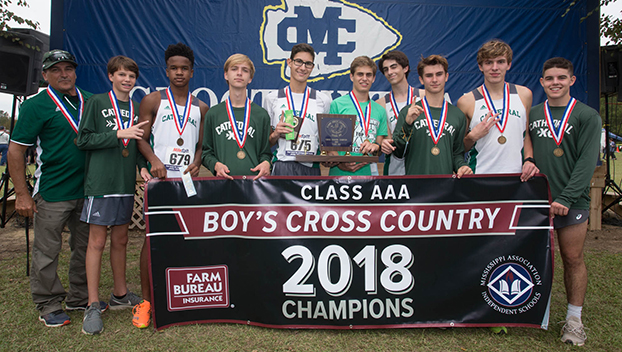 His best runners had been running consistently at the top for most of the season.

And in the last few weeks, Smith had been seeing his team run with confidence. The two teams finished in first place during Cathedral’s invitational meet the week before the AAA state championship in at Choctaw Trail at Mississippi College in Clinton.

Even still, Smith stood at the starting line Tuesday afternoon with what he called “cautious anxiety.”

He knew that everything had to fall in place — and it did.

“They competed against everybody from Presbyterian Christian School, Jackson Academy, Jackson Prep, Madison Ridgeland Academy,” Smith said. “Some of the schools are twice as big as ours.’

On the varsity side, Cathedral finished with a score of 40 points, beating out second place Silliman Academy who scored 86 points.

Cathedral senior Ryan Skates finished in first place with a time of 17:22.

Skates is currently ranked second in the MAIS and 19th the state among public and private school’s, Smith said.

Smith said he is proud of his runners and the work they have put into making the championship happen and building a winning program.

“It is just work,” Smith said. “It is work and kids buying into the fact that they know they can win.”

Smith said the year the varsity team lost the championship by four points in 2015 was very critical to the future success of the team.

Their work ethic and accomplishment have become contagious, Smith said.

For the junior varsity runners, Smith said they have accomplished something special.

“The win is probably the most inspirational thing for those young guys. It will be instrumental in building a productive program.”

Up or Down: Vidalia at crossroads after back-to-back losses