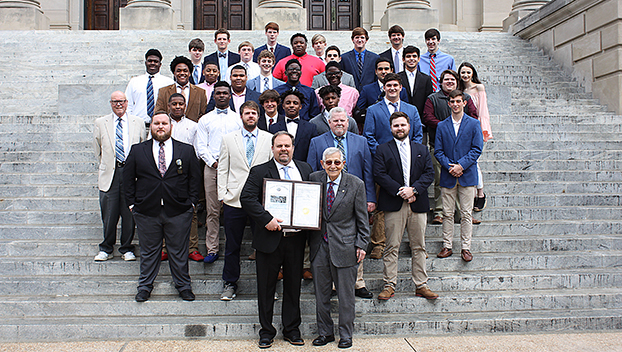 Sen. Bob Dearing, D-Natchez, introduced Senate Concurrent Resolution 581 honoring the school and its accomplishments and hosted the team at the capitol on Tuesday.

Flanked by ACCS football team members and head coach David King, Dearing introduced the team to the Senate from the podium in the Senate Chamber before calling for the resolution to be read.

“Mr. President, members of the Senate,” Dearing said. “What makes this team so unique is they started off the season 7-0 only to find out after the seventh game they had an ineligible player and had to forfeit the first seven games. They fought back from this adversity and went on to win a second state championship.”

ACCS’s first state championship was in 1986, Dearing said, before a member of the Senate read the resolution commending and congratulating the team.

Dearing then asked King to make a few words.

“Thank you so much,” King said taking the podium. “What a privilege and an honor it is to be here on this beautiful day representing the beautiful city of Natchez.”

King thanked Lt. Gov. Tate Reeves and others before commending his team.

“I’m the guy who is responsible for the forfeiture of the first seven games, so I thank this group (the players standing behind King) for saving my job.”

Dearing said he is proud of the team and was honored to have them join him at the Capitol on Tuesday.

“We don’t get too many teams out of Natchez coming up to the capitol to get recognized for winning a state championship,” Dearing said.

MONROE, La. — Brett Walsworth went 4-for-4 with a double and Peyton Fort struck out 12 batters in four... read more