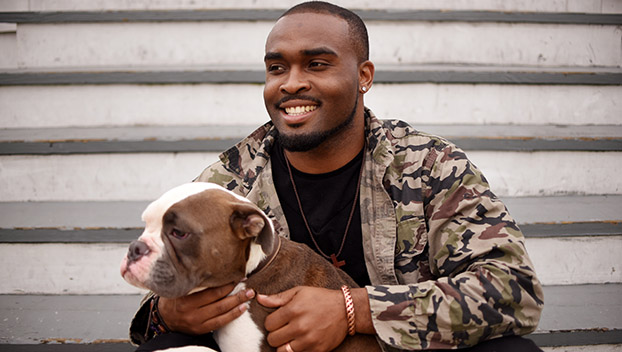 Brian Isaac is hoping to get back into arena football with the help of his Old English Bulldog Camille. (Nicoel Hester / The Natchez Democrat)

A friend indeed: Arena football player, bulldog ‘need’ each other

She also helped Isaac rehab an equilibrium problem from a concussion he sustained while playing for the Amarillo Venom of the Indoor Football League.

At the age of 26 Isaac is hoping to get back into arena football.

“I know my dog needed her daily exercise and I did too,” Isaac said. “We help each other mentally, physically and emotionally.”

Isaac played the 2017 season for Amarillo and 10 games into a 12-game season he got injured.

At Natchez High Isaac played wide receiver. However, he was a much better player on the defensive side of the ball, he said.

In the Mississippi-Louisiana all star game his senior year Isaac had an interception late in the game to secure the win for his team.

For that game-winning play Isaac was awarded the game MVP trophy.

After that, Isaac was off to Copiah-Lincoln Community College in Wesson to play defensive back. He also was tapped to play special teams, both kicking and receiving.

At the University of Tennessee at Martin Isaac played defensive back exclusively.

“Guy’s there were a little bit faster, and I had to focus on my skills as a defensive back,” Isaac said.

After college, an invitation from his older brother to come to Colorado landed him in Aurora, Colorado, Isaac said.

His plan, Isaac said always was to play professional football, so he kept all of his skills sharp by playing flag football.

Sending off game tapes, Isaac said he was able to get the attention of coaches for Amarillo.

“They invited me down for three day’s to work out and tryout,” Isaac said, adding he did not need all three days.

“They signed me after the first day of tryouts,” Isaac said. “That’s when I knew my dream had come true.”

One day a friend invited Isaac to a dog show, and it was there he saw a magnificent and rare breed the Olde English Bulldogge, which is recognized by the United Kennel Club and differs from the American Kennel Association breed of the English Bulldog.

“I love this breed because of its athletic build,” Isaac said, “abilities, temperament. They are very intelligent, also.”

Isaac said he became so enamored with the breed that he wound up getting one that was given to him by Paula Simmons. Isaac named the dog Camille.

With a new athletic companion, Isaac said he has Camille to workout and train with. Working every day to get her to her first show paid off, Isaac said, and like any well-prepared athlete she was awarded a blue ribbon for Best Female Bully in her age class.

“I like competing in the show’s because it is a competition and if your dog wins their value steadily increases,” Isaac said.

Isaac said he still works out every day like any great athlete with hopes to get back into pro football.

Camille, Isaac said, is also in training to go after another blue ribbon.

NATCHEZ — History will be made on Friday, March 8 at the 2019 MAIS Class A-AA Girls’ All-Star Game takes... read more