The Dart: Big things come in small packages for family 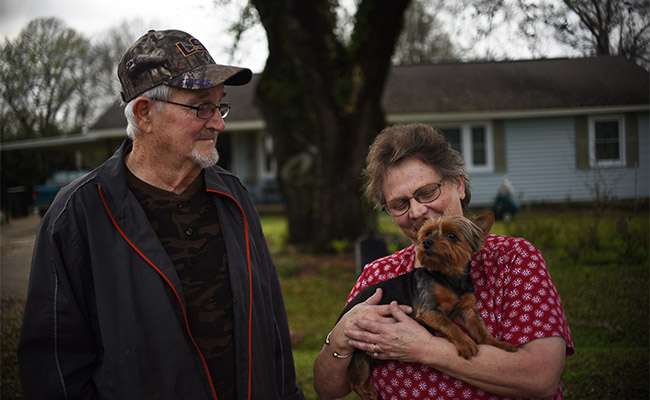 NATCHEZ — Jake stood at the edge of his nearly six-acre property on four legs with his head held high in a dominant fashion. He pawed the dirt in the flowerbed like a bull whenever he noticed strangers approaching.

Anytime an unfamiliar someone went near his favorite companion, Brenda Freeman, Jake let out a ferocious growl to protect her — or as ferocious a growl as a 6-pound Yorkie could manage.

When The Dart landed on Booker Road near Morgantown Middle School on Friday afternoon, the tiny dog had a great deal of pressure on his tiny back as he worked to protect his family of 9 years, so it seemed.

Jake’s six acres actually belonged to Lonnie Freeman, Brenda’s husband of 32 years, who said he spends most of his time in the garden, cutting grass and keeping his house in top shape.

It seems that a lot of emotion can be packed into small spaces, especially for Jake his family.

Lonnie Freeman bought and moved into the house on Booker Road with his wife in 2011, but it has always been home, he said.

He and his six siblings grew up between the same walls, he said. When his parents died, his childhood home was left to him and his siblings. Though some of them wanted to sell their shares, Lonnie would not sell his, he said.

“My dad built it, and I came back here to take care of my mom until she died,” he said. “Then I bought the house and moved back in.”

Brenda said she and her husband of 32 years look out for each other and their families, while tiny Jake looks out for them.

“We like to aggravate each other mostly,” Brenda said, with a laugh. “We’re too old to have fun.”

After Brenda said this, Lonnie started to tease Jake, making him bark.

“Do you want to go to Walmart?” Lonnie said to Jake, and he immediately stopped barking and tilted his head to one side.

Jokes aside, Lonnie said he enjoys working outside and visiting with his family.