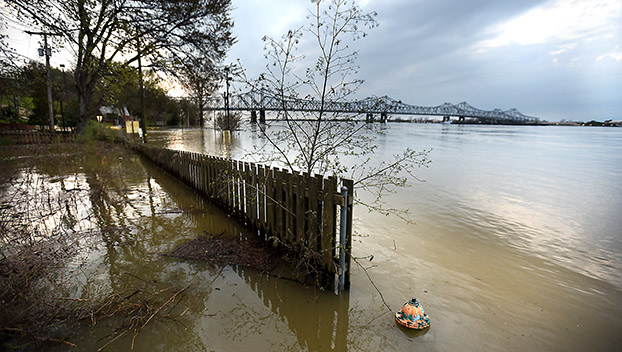 Floodwaters at the bottom of Silver Street in Natchez. (file photo)

NATCHEZ — Residents along the lower Mississippi River will see little impact from the historic flooding on the Missouri River, forecasters say.

At least four people have died and 75 cities have issued states of emergencies in Nebraska and four other Midwest states as floodwaters from the Missouri River empty into the Mississippi River just north of St. Louis. In some areas, the river has burst through levees causing widespread damage and flooded entire towns.

Residents in Vidalia and surrounding low-lying areas should not expect similar images of destruction and widespread damage, thanks to falling river levels on the Ohio and Tennessee rivers, said Marty Pope, a hydrologist with the National Weather Service in Jackson.

“As of now (flooding on the Missouri River) will not have a big impact on the river level in Natchez,” Pope said.

Pope said the rate at which the Ohio River is falling is expected to “balance out” any additional water coming out of the Missouri River into the Mississippi River.

Data from the National Weather Service shows that the Ohio River empties three times as much water into the Mississippi River at Cairo, Illinois, than the Missouri River on a typical day.

“The biggest flow comes out of the Ohio River,” Pope said. “The Missouri is only a small part of everything that goes into the Mississippi.”

At 2 p.m. Tuesday the river stood at 57.77 feet on the Natchez river gauge.Pope said the 28-day forecast for the Mississippi River at Natchez shows the river slowly dropping, keeping the river elevated above flood stage through April. The forecasts take into account any precipitation predicted for the next 48 hours, Pope said.

“Any new rainfall could have a slight impact,” Pope said.

Even still, longer range weather models do not show the river rising near the 57.86 feet that was seen on March 12, Pope said.

“The river may fall a little slower, but it will continue to fall until the middle of April, where it is forecast to bottom out,” Pope said.

The one variable that could have the greatest impact on the river levels will be when the snow melts in Minnesota in the coming months.

“That will be the big kicker,” Pope said. “Especially if it is combined with a large amount of rain.”

“Right now we are in pretty good shape,” Pope said.

CLAYTON — A Clayton man was indicted last week on second-degree murder charges for the alleged abuse of his... read more