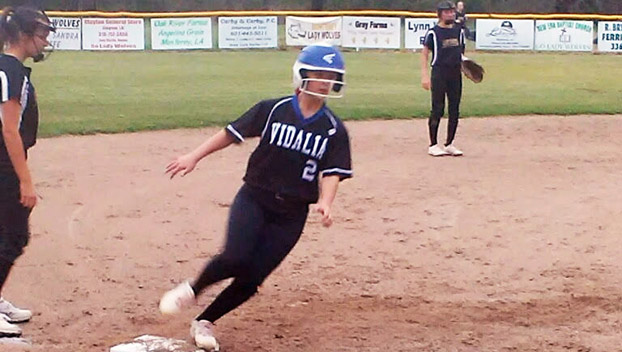 Catcher Macie Seyfarth makes a turn at third base, but stays on the base. She would score two batters later. (Tim Guercio, The Natchez Democrat)

MONTEREY — The Monterey Lady Wolves got enough base hits to outlast the Vidalia Lady Vikings 9-6 late Monday afternoon in Monterey.

In a game of evenly matched ball clubs Vidalia was never able to get the lead at any time in the game.

They pulled even with a tie 3-3 in the top of the third, however.

Pitching for the Lady Wolves was Avery Cupit, who showed that she could pitch and get outs. After two innings she had three strikeouts and three infield ground balls that went over to first base for outs.

The Lady Vikings’ No. 1 pitcher Sara Cockerham was on the mound again, limiting the damage that started right away in the first inning with two errors behind her in the field.

Down 3-0, Cockerham got Vidalia even with a 3-run home run blast over the fence and just inside the foul pole.

Monterey swung their bats in the bottom of the third, putting the first three batters on base to load the bases and from there they crossed home plate three more times in the inning. Monterey pulled away from Vidalia again, making the score 6-3.

Vidalia knows how to swing the bats also, and they know how to come back from late-game deficits.

After five complete innings the Lady Vikings tied the game at six runs.

Cockerham threw three ground-ball outs that the infield helped put away at first base for a three up, three down fifth inning.

In the Lady Wolves’ sixth inning Hannah Hitt had a bases-loaded hit. Madison Passman followed next with her RBI hit. Madelyn Mount singled, and Andy Gray had a two RBI singles.

Vidalia couldn’t match being another three runs down for the third time and bowed to the Lady Wolves 9-6.

For the game, Vidalia had 10 hits and 7 errors compared to 7 hits and only 2 errors for Monterey.

“We have done this in three other losses,” said Vidalia head coach Forrest Foster. “We have more hits but commit more errors. Lexi Maynard, our starting shortstop, is still out injured, so we have had to move some players around the infield.”

Coach Cary Shively of Monterey was pleased after the game.

“I was really proud of our team,” Shively said. “Vidalia kept scoring runs, and we kept battling and got big hits when we needed them.”

Winning pitcher was Cupit. The loss goes to Cockerham.

By Tim Guercio VIDALIA — The Vidalia Lady Vikings won the first game of the Viking Classic, a tournament they... read more