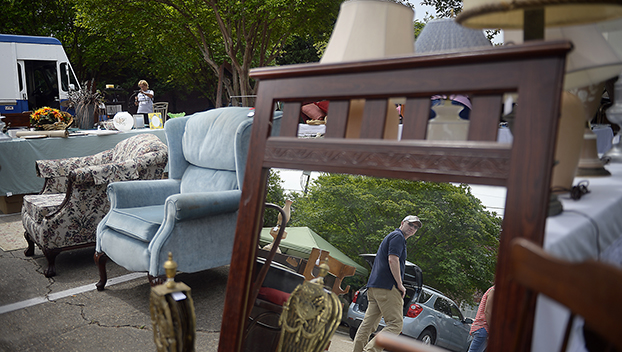 NATCHEZ — Seven years ago, the United Methodist Women of Jefferson Street United Methodist Church in Jackson came up with a plan to raise money to support the organization’s various local, state and international missions.

“We had a couple of ladies who love this kind of venue,” Hutchins said, “and do this on their own personal time here in town, too. So, we had some good expertise.”

Beginning at 7 a.m. Saturday, rain or shine, at 511 Jefferson Street, Natchez, the women will host the seventh-annual Community Market in which approximately 40 vendors will set up booths to sell their goods.

“We have everything,” said Millicent Mayo, a member of the United Methodist Women group at Jefferson Street United Methodist Church. “This year we have all kinds of hand-crafted stuff, jewelry, trash and treasure, anything. We have one lady who is bringing a whole trailer load of tools, men’s tools.”

“Every year it is packed,” Mayo said. “We have outside vendors. People come early to that one, because they open early. We have inside booths; they open at seven o’clock. People come and try to hit the outside booths first.”

If it rains Saturday, never fear, the Christian Life Center is filled with inside booths, Hutchins said.

“This is our seventh year doing it, so we’ve had fun doing it,” Mayo said. “It’s lots of work, but the community likes it, too.”

In addition to having a good time and providing an event for the community, proceeds generated from hosting the event will go to several missions funded by the United Methodist Women, including:

4Local: Stewpot, Habitat for Humanity and the Battered Women’s Shelter;

4International: Ganta United Methodist Hospital in Liberia and the beans and rice ministry in Coast Rica.

‘Harmony in the Park’ event set for April 20

NATCHEZ — Just as proper use of black and white keys on the piano make the best harmony, Natchez... read more