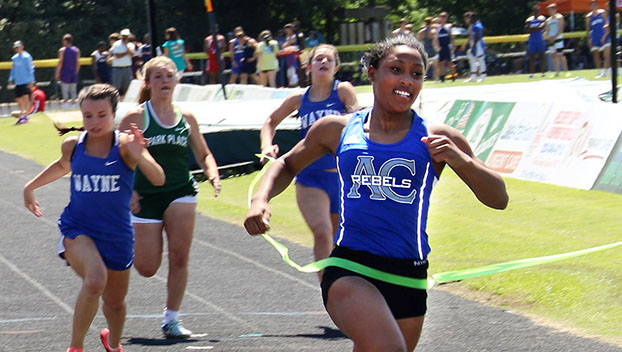 Diandrenique Gaines sprints to the finish line during a recent track meet. (submitted)

Diandrenique Gaines is coming off of her state championship performance last Saturday at Jackson Prep, where she broke two state records in track.

The 100 meters that Gaines ran in the competition was clocked at 11.60 seconds and broke the record that was set in 1984.

Gaines also broke the 200-meter record at the state meet.

Gaines set a goal for herself last July to win both events at the MAIS class AAA state championships, and she did just that.

Gaines hasn’t stopped training, she said, working on shaving hundredth’s of seconds off the time of 11.60 in the 100 meters.

Gaines said her new goal is to be on the 2020 Summer Olympic team in Tokyo, Japan, and to run the 100-meter dash for The United States.

In the Olympic games it’s possible that 5 hundredths of a second could mean the difference between a gold medal and being off the medal podium completely.

The qualifying time for the 2016 Olympics was 11.32 seconds, and that is what Gaines said she is working toward now.

“We are working on short fast drills with a quick burst of energy coming out of the starting blocks,” said Matthew Freeman, Gaines’ coach. “We work on good form in a short burst going hard for only a few strides down the track.”

Gaines said she is working on her form.

“I am working on staying down low as I come out of the blocks for as long as I can,

Gaines has competed in China and Europe and had some wins there in 2016 and 17.

Longtime coach and manager of events and travel for Gaines and her family is Phillip Travis.

“Nique will be competing several times this summer starting May 25 in Meridian,” Travis said, “June 6-8 in Albuquerque, later in June an AAU qualifier, and a big meet July 18-21, The Pan American Athletics Championships in Costa Rica.”

NATCHEZ — Rain did not stop nearly 50 athletes who paraded down Main Street on Thursday morning behind an Olympic... read more