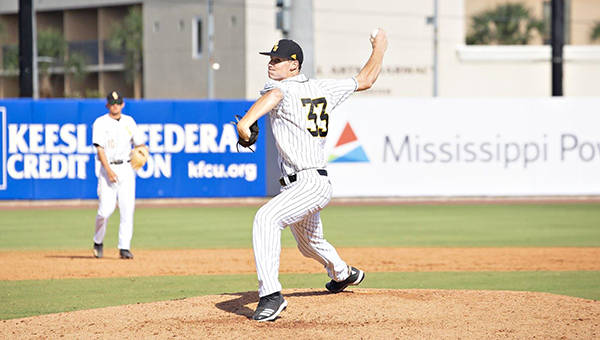 BILOXI — Of all the home runs Matt Wallner has hit in his stellar career at Southern Miss, few have been as big as the one he belted Wednesday.

The big left-hander hit a two-run, walk-off home run in the bottom of the 10th inning to cap a huge Southern Miss comeback and give the Golden Eagles a 6-4 victory over Rice in the first round of the Conference USA Tournament.

Southern Miss trailed 4-1 entering the bottom of the ninth inning and scored three runs — all with two outs — to tie it.

Singles by Bryant Bowen and Fred Franklin, and a walk to Danny Lynch loaded the bases. Storme Cooper then doubled down the right field line to bring in two runners. Jacob Edwards, who had entered as a pinch-runner for Lynch, then scored the tying run on a wild pitch.

Cooper had had only 37 at-bats this season before Wednesday’s game. Edwards had only played in nine games.

“The game of baseball is a game of opportunity,” Southern Miss coach Scott Berry said. “Stormy has been sitting over there and seeing a lot more than playing. For him to come up with an opportunity and deliver like he did, you can’t say enough about that senior.”

Cooper was stranded at third base, but Wallner came up big in the 10th.

Matthew Guidry started the winning rally with a leadoff walk. After Hunter Slater struck out, Wallner hit a 2-1 pitch over the right field wall for the game-winner.

“I was looking for a pitch up and I was fortunate enough to get that fast ball up, actually the second one, I got a barrel to it and was able to get it out,” Wallner said of Southern Miss’ fifth walk-off hit of the season. “We fought back and we needed some clutch hits.”

It was the 55th career home run for Wallner, who had set the school record in the regular-season finale, and it gave Southern Miss (35-19) a victory it desperately needed.

The Golden Eagles must win the Conference USA Tournament to earn a berth in the NCAA Tournament, and Wednesday’s win allowed it to avoid having to battle through the losers’ bracket.

Southern Miss (35-19) will instead play Marshall in a winners’ bracket game Thursday at 4 p.m.

Marshall beat Louisiana Tech 6-4 earlier Wednesday in a 12-inning marathon that lasted 4 hours and 49 minutes. It was the longest game by time in the history of the C-USA Tournament.

HOOVER, Ala — It wasn’t for lack of opportunity, but Ole Miss is no longer in the winners’ bracket of... read more