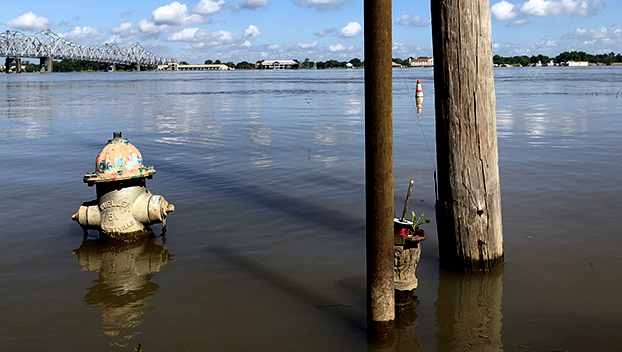 A fire hydrant is surrounded by floodwaters along Silver Street in Natchez Saturday. (Ben Hillyer / The Natchez Democrat)

NATCHEZ — Local officials are making preparations for what could be the second-highest recorded flood for the Mississippi River in the area.

National Weather Service officials say the river is projected to reach 59-feet at the Natchez gage at 7 a.m. June 7 — approximately 3 feet lower than the record flood of 61.95 feet set on May 19, 2011.

The second highest flood was recorded in 1937 when the river reached 58 feet. Current projections would beat that record by 1 foot.

In Natchez, the river has been slowly rising for weeks and has been above flood stage for 140 days, a record for the area.

Vidalia Mayor Buz Craft said a meeting has been planned for Tuesday morning with town staff and representatives of the riverfront to discuss the situation.

Craft said the town is already filling up sandbags this weekend to use in low spots along the riverfront that are in question.

“We will have a lot of people working with sandbags,” Craft said.

The riverwalk along the riverfront will likely be closed in the coming days, Craft said, to protect the public.

Craft said when the decision to close the riverwalk is made, the Vidalia Riverfront — including the businesses — will remain open, but people will not be allowed on the sidewalk along the river.

“Water will be up against the riverwalk,” Craft said. “We don’t need someone to fall in.”

In 2011, the town built temporary retaining walls using HESCO baskets placed around the Vidalia Conference and Convention Center and around riverfront businesses to hold back the floodwaters that inundated the riverfront and reached the bottom of the levee.

“We are going to have to play a role in placing those baskets to prevent water from getting into the buildings,” Grennell said.

The additional work will require more of Silver Street to be blocked for traffic.

Grennell said Learned’s Mill Road is also closed to traffic and can only be accessed by property owners.

Craft said he and town officials continue to keep informed with the latest flood forecasts and will do what is necessary to protect property and the public.

Craft said he continues to be concerned about additional rain that is falling north of the Miss-Lou.

“What bothers me is rains up north, because all of that water comes down here,” Craft said. “We can’t help what the Lord sends. We have to deal with it when it comes.”

National Weather Service meteorologist in Jackson Dan Byrd said heavy rains and storm are predicted to dump rain across the Central Plains and the Midwest. With the Missouri and the Arkansas rivers already filled to capacity any additional rainfall will cause more problems through the Mississippi River Valley, Byrd said.

“It has been kind of an accumulation thing,” Byrd said. “It all feeds in the Mississippi River.”

Each new weather system has the potential to create additional problems, Byrd said.

The 28-day forecast issued by the National Weather Service each day takes into account precipitation forecast for the next 48-hours. Additional rainfall can change the outlook.