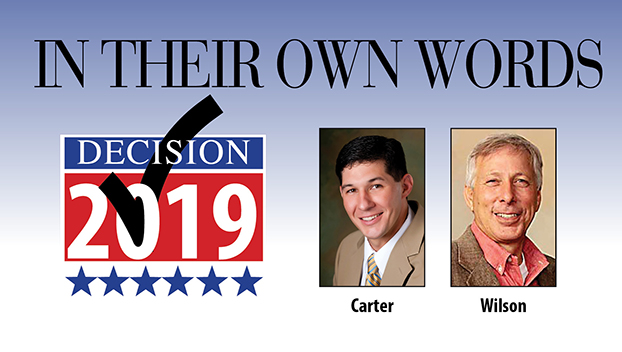 The Adams County Supervisor’s duties are outlined below as summarized from Mississippi state statutes by the Mississippi State University Extension service.

“Boards of supervisors have the authority to regulate the county’s affairs within the limits of state law. Supervisors are delegated a variety of public duties. They have full authority over county roads, ferries, bridges, county law enforcement, collections, fines and levying taxes.

“The board of supervisors appoints some county officials. The board is responsible for guiding and establishing policy for the complex multi-million dollar budgets of county government.

Both candidates submitted responses to the same five questions given to them by The Natchez Democrat. Candidates’ answers were limited to no more than 150 words.

Why should Adams County voters elect you to serve as the supervisor in your district?

David Carter: Voters in District 2 have benefitted from my job completion skills while I have served them. I’ve worked with our volunteers and state fire agencies to lower the fire rating in many parts of District 2 saving homeowners substantial money. After an abandonment of a gas line system that impacted 152 homes, I worked with the State Public Service Commissioner, local representatives and three private companies to create a solution to maintain service resulting in the first air propane residential system in the state of Mississippi. After fire destroyed the old Kingston School House, I worked with local contractors and employees to rebuild the new Kingston Community Center for all Adams County residents to enjoy. On a countywide scale I led the charge to move to a single provider Ambulance system which has resulted in an over 90% improved response time in both the city limits and county priority zones.

Kevin Wilson: First of all, I am not running because I need a job. I am running because I have been employed full time since I was 16 years old (43 years) the last 28 years self-employed. My wife and I own and operate four businesses in Adams County. I have a lot of experience staying within a budget and making payrolls. I have always been careful with money whether big or small expenditures. And I will certainly be careful with the Adams County taxpayers’ money.

What is the biggest issue facing the Adams County voters in the district you are running in?

David Carter: District 2 is the largest, most diverse district in the county so the biggest issue varies throughout the district depending on whom you ask and the area you are in. Obviously job growth and opportunity is a major issue all across America, it’s self-explanatory. Therefore, I’ll focus on more local concerns. On the U.S. 61 south corridor increased taxation and city annexation are concerns shared and expressed by many residents. In our rural areas, fire protection is a growing concern along with continuing road improvement, which is highly contingent on funding sources.

Kevin Wilson: I believe a dwindling population and tax base is one of the biggest issues facing Adams County as a whole as well as District 2. The lack of industry and jobs needs to be addressed immediately not just talked about. The fact that our children have to leave this area to work is causing a constant drain on our area. How many friends have moved off to be near their children and grandchildren?

What are the two main objectives you would want to accomplish if elected to the Adams County Supervisor position you are seeking?

David Carter: Adams County has over 520 miles of roads with the overwhelming majority being in the county jurisdiction. Many of our roads are in deteriorating condition; this is a perpetual problem that we must continue to address indefinitely. The primary limiting factor for infrastructure improvement is funding. Therefore, we must continue to seek avenues for additional funding from industrial recruitment to enhanced local retail that along with innovative sources like the exploding riverboat industry can be a major infusion of revenue for our area if we embrace it.

While I did not agree with the addition of a swimming pool in Adams County, it was a step forward with recreation. We must continue to improve health and wellness opportunities for all ages, young and old. While we should continue to work with outside groups like the Vidalia sports complex, we need to make improvements for our own facilities as well.

Kevin Wilson: Recruiting jobs is huge for our survival whether industry or even small companies coming to Adams County. As many of you know one of the biggest battles I have ever gotten into is with the Natchez Adams County School System and their board. We have got to fix that and start educating our children. The BOS has appointed school board members on the board with little financial or business experience and the taxpayers are paying the price. Spending and taxing does not work. We need results and accountability.

What experience do you have that uniquely qualifies you for the Adams County Supervisor position you are seeking?

David Carter: I have clearly demonstrated my ability to build relationships and complete tasks throughout my public and private career. In my short time as a public servant I have made relationships on the local, state and national level that have helped with resolving complex issues and getting the information needed in short time frames when needed. Unfortunately, in the business of politics, relationships are vital and priceless and I have been fortunate to be blessed with the ability to build positive and valuable working relationships that benefit Adams County.

In the private sector I have been blessed to use my job completion and negotiation skills to move some local companies ahead in challenging times. In less than one year we moved Great River Honda from the brink of closing to one of the top 20 Honda Powersports dealerships in the nation.

Kevin Wilson: My experience and success in business in the last four decades is what I have to offer. One of my mottos has always been, “I might do more than I said I would, but I would never do less.”

The city and county have been presented with several options for consolidating governmental services. Do you favor consolidation, and if so, in what form?

David Carter: There are two issues here to address, one is consolidation and one is annexation. Yes, I support the idea of consolidating some services for Natchez and Adams County. We have some city-county services already fully consolidated like the tax collector and tax assessor office. Then we have some area we have recently consolidated like housing city inmates at the county jail and consolidating law enforcement dispatch into E- 911. We also have areas like fire protection and recreation that are ongoing consolidation and require more negotiations to be fully beneficial for both sides. Other areas like Natchez Police and Adams County Sheriff or Public Works and County Road Department consolidation have been mentioned but require more investigation before becoming practical or financially feasible. So while I approve consolidation I am opposed to annexation where the city takes in business and residential areas primarily along the U.S. 61 South corridor.

Kevin Wilson: I am not a fan of consolidating every part of Natchez and Adams County. Some of the areas that have been consolidated have made sense. The 911 call center and the Natchez Police Department jail shutting down are two good examples that have worked. They both got off to a rocky start, the 911 call center proved to be a little more complicated than initially believed. The shutting down of the jail was not well received by the sheriff, but he eventually came around. This leads to my concern of having a “top cop.” If you have good people running different departments great! If you get the wrong people in, then what? We need to be careful here.

BY SABRINA ROBERTSON THE NATCHEZ DEMOCRAT NATCHEZ — Filmmakers plan to stage a vehicle crashing through the front entrance of... read more