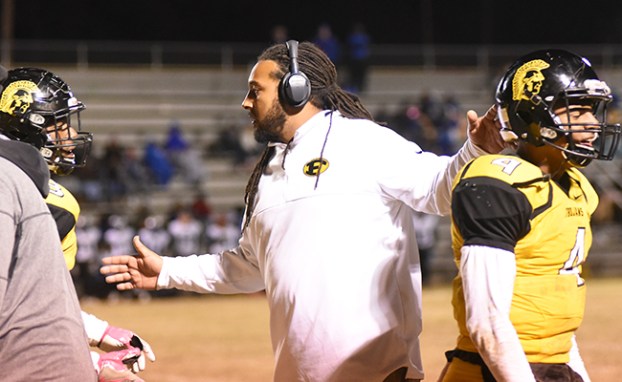 Ferriday High School football coach Stanley Smith instructs his team during a game this past fall. Smith was one of many coaches to lead local teams in their first-year during 2017. (Nicole Hester | The Natchez Democrat)

The Trojans players and coaching staff enjoyed an 11-3 season in 2017 and last year they posted a 10-4 record.

Summer practice for Smith is about weightlifting and conditioning for next year’s squad.

“We skip spring ball, because it’s the end of the school year and students are in school taking tests and trying to wrap up their year.

We come out in June and will go till the end of July, lifting weights, running drills and we also will be timing guys in the 40,” Smith said.

Smith and his assistant coaches are getting the players in early before the season starts to see what they’ve got.

“If you’re not executing at practice then I can’t trust you in the game,” Smith said.

“We have positions that we have to fill; if they can accept the challenge to replace a player who graduated then they will have to perform in the weight room, in the classroom and on the practice field, I might make a change at practice or in a game.”

Last year the Trojans had three seniors who signed college football scholarships, those positions all of a sudden become important after losing that talent, Smith said.

The Trojans lost linebacker Larry Scott to Delta State University and have Smith plugging in Tevyn Byrd in that position.

Smith said it will be a challenge to replace Scott, but Byrd is his guy.

Coby Dillon will be at quarterback, coming back to be a third-year starter and needs somebody to throw it to.

“Jamien Green was our wide receiver, he signed to play for Northeast Oklahoma State,” Smith said. “Right now we have Elijah White who was first team all-district as a sophomore and Byron Milligan, he’s a running back recovering from an ACL injury.”

Smith said that they don’t get ahead of themselves by focusing on the whole season.

“We don’t look at the whole season, we look at being 1-0 on that week,” Smith said. “That is how we approach the season.”

By TIM GUERCIO THE NATCHEZ DEMOCRAT NATCHEZ — Herman Ransom said he was first introduced to the game of tennis in... read more