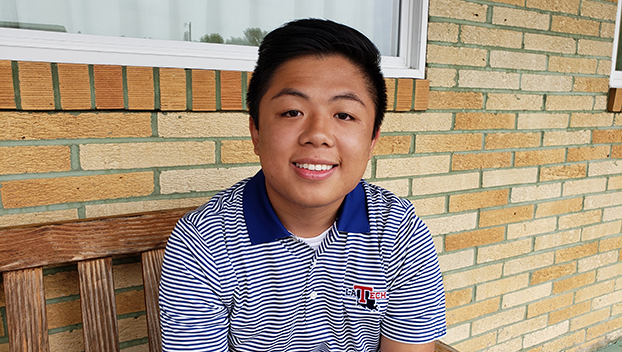 Thomas Nguyen, the son of Hong and Diep Nguyen, is the Class of 2019 Valedictorian at Vidalia High School and plans to study computer science at Louisiana Tech University this fall. (Sabrina Robertson / The Natchez Democrat)

Bright Future: Vidalia valedictorian excels in all he does

VIDALIA — Vidalia High School’s Class of 2019 Valedictorian Thomas Nguyen said he is not content with an average performance.

Nguyen, the son of Hong and Diep Nguyen, said his dad taught him the value of working hard to be the best at everything he does.

Though graduating as valedictorian from Vidalia High School presented its challenges, Nguyen said he’s ready to tackle a bigger challenge and would strive to graduate from Louisiana Tech University at the top of his class.

“I’m ready for the next level, and I want to stay at the top,” Nguyen said. “I know it’s not going to be easy, but I want to challenge myself.”

Sports and computers are two of his biggest hobbies, Nguyen said, adding he plans to follow in the footsteps of his older brother and study computer science at LA Tech in hopes of becoming a software engineer.

“I’m really into computers,” Nguyen said, “and I enjoy building PCs and putting them together.”

Not only did Nguyen excel in school academically, he was also an inaugural member of several clubs and teams that were started by his classmates and enjoyed helping other students in subjects he was good at, especially in math, he said.

Nguyen said he played team captain of the Vidalia High School soccer team during his junior year and was also a member of the History Club, Science Club and KEY Club throughout high school, in which he volunteered for several local charities such as the Habitat for Humanity and the Natchez Stewpot.

“It felt like a great way to give back to the community I live in,” Nguyen said.

NATCHEZ — The people of the Miss-Lou have two opportunities to celebrate the Fourth of July this week without... read more