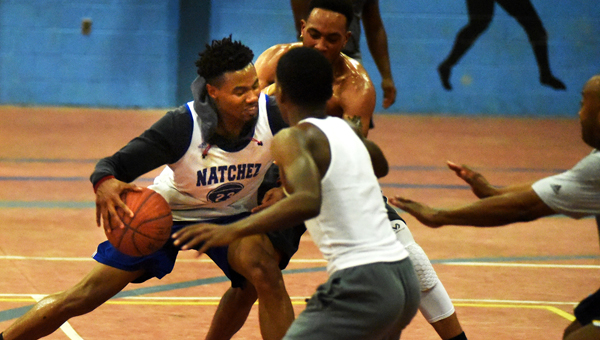 “We were going to use the old Margaret Martin gym but there is no air conditioning, and the fans we tried didn’t help,” Minor said. “It was just way too hot.”

“Fred Butcher was kind enough to let us use the gym at Robert Lewis Middle School,” Minor said.

The newest recreation board member Matilda Stephens said the games will each have two referees on the floor, and the teams will play four quarters that will be 10 minutes each and will be on a time clock with an operator.

Referees C. Dandridge Brooks and Charles “Mr. C” Cothern will get their work in with three games per night at 6 p.m. 7 p.m. and 8 p.m. every Tuesday and Thursday.

The other teams in the league are Bluff Ballers, Drip City, Natchez Fire Dept. Haywood Heat and Wal-Mart.

Minor said there will be a $3 charge to come out and watch all three games and a concession stand open until the last game is over.

By TIM GUERCIO THE NATCHEZ DEMOCRAT VIDALIA — Concordia Dixie Youth 13-14 year-old-All Star team will be playing in the... read more