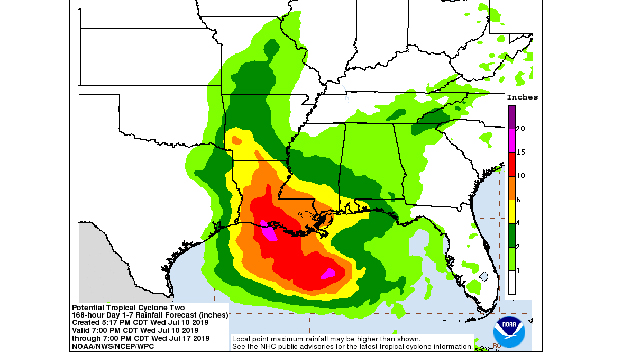 NATCHEZ — A tropical disturbance in the Gulf of Mexico is forecast to make landfall in southwest Louisiana as a hurricane, according to the National Hurricane Center.

The storm has the potential to dump significant rainfall over the Miss-Lou, including areas that are still dealing with flooding from the Mississippi River.

Meteorologist Greg Garrett from the National Weather Service in Jackson said the system is still at a point where it is too difficult to predict the path of the storm.

Current models show the storm has the potential to dump between 6-to-10 inches of rain as it moves inland. Those models are very preliminary, Garrett said.

“Our models right now are all over the place,” Garrett said. “There is still a lot of uncertainty as to where it will make landfall and how much rainfall there will be.”

Garrett said the storm, which was classified as a Tropical Cyclone Two on Wednesday afternoon, is expected to strengthen into a tropical depression, with the potential to become a hurricane before it makes landfall.

“Right now it is sitting over the north central Gulf and is not a tropical depression yet,” Garrett said Wednesday afternoon.

By early Saturday, a northwest motion is expected. On the forecast track, the system is expected to approach the central U.S. Gulf Coast this weekend.

Maximum sustained winds are near 30 mph with higher gusts. Strengthening is forecast during the next 72 hours, and the disturbance is forecast to become a tropical depression Thursday morning, a tropical storm Thursday night and a hurricane on Friday. The storm would be named Barry.

Garrett said the Miss-Lou could start seeing effects from the tropical system on Friday night when the outer rain bands from the storm move into the area.

“The outer rain bands have the potential to be prolific rain producers, dumping a significant amount of rain in a short period of time,” Garrett said.

Rainfall amounts exceeding 6 to 9 inches have already occurred across portions of the New Orlean metropolitan area, which resulted in flooding.

Depending on the path of the storm, Garret said rainfall totals could start “mounting up” as areas of rain spread across the region.