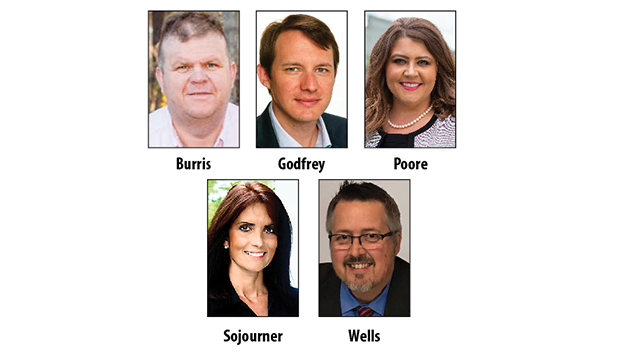 The District 37 seat represents Adams, Amite, Franklin and Pike counties and five Republicans and one Democratic candidate are vying for the seat.

“I will use my practical business and life experience to better our district,” Burris said.

Burris is a co-owner at Glass Builders of Mississippi and owner at Pine Ridge Shooting Center.

Burris’ campaign literature says he favors a non-political approach to public office and believes his business experience makes him an excellent candidate for the District 37 Senate seat.

“As a local businessman, I have provided jobs to Southwest Mississippi, and I know how to bring those jobs to our district,” Burris said.

“I will work to protect our second amendment right, the rights of the unborn and private property rights with our Christian values put first,” Burris said.

“I believe that in order for Southwest Mississippi to grow in a positive direction, our basic infrastructure must be updated,” Burris said.

Burris is married to his wife, Laura, and they have a daughter named Abby. Burris is a member of the Rotary Club of McComb, holds a forestry degree from Mississippi State University, is a past assistant Boy Scouts master and is an NRA shooting instructor for rifle, pistol and shotgun.

Will Godfrey of Natchez is the lone Democratic candidate who will face the winner of the Republican primary in the Nov. 5 general election.

Godfrey graduated from Trinity Episcopal School in Natchez and earned a degree in political science from Mississippi State University with a double minor in history and public policy.

After graduating from Ole Miss, Godfrey said he worked on campaigns for different candidates throughout the state for eight years before deciding to run for state senate.

“I’ve traveled a lot during that time to almost every county in Mississippi and was exposed to a lot in the political realm,” Godfrey said. “I think we have major political problems in Mississippi. We have a state government run strictly by lobbyists with their own personal agenda and the community’s voice is often left behind.

“No matter where you are, people say our state system is not well connected with their communities and I agree. … I’ve decided to run to make a difference.”

If elected state senator, Godfrey said his primary concern would be creating jobs and securing the future of the Southwest Mississippi region with economic development.

Other issues are tied to those primary concerns, Godfrey said, including the need for infrastructural repairs to roads and bridge, rural internet and phone services, better healthcare, education and fair and competitive salaries for teachers and teaching assistants.

“Petty politics and incompetence keeps a lot of things from getting done in our state,” Godfrey said. “One of the biggest concerns to me is healthcare. It’s outrageous that our state legislators would stand by while our rural hospitals are shutting down and are losing money. The state put the responsibility of handling mental health on counties, but ask anyone whose family member is facing a mental health issue, the place for them to get help shouldn’t be the county jail.

“Also, education and economic development go hand in hand. … I am passionate about these issues, and until we elect more people to our legislative seats who are willing to shove all of their special interests aside instead of focusing on petty politics — until every kid has the opportunity for education — things won’t improve. I plan to grow our community and region in our state where kids, instead of leaving and moving elsewhere like you see now, continue to live and work in their communities.”

“My parents, Bill and Debbie Halford, have always inspired and encouraged my brother and me to come back home to Southwest Mississippi and give back to the Christian community that raised us,” Poore said.

Poore and her husband, Dain, currently reside in Franklin County.

“I truly believe that I am educated, experienced and prepared to lead us forward in the State Senate,” Poore said. “My whole life, I have heard people talk about and have seen with my own eyes our area just barely getting by while other areas of the state have prospered.  My educational background and legal practice, along with practical experience in local community development organizations and public policy initiatives, has prepared me to be your most effective advocate in Jackson.

“To usher in a new, more prosperous era for Southwest Mississippi, we must think proactively and innovatively. I have a forward-looking vision for Adams, Amite, Franklin, and Pike counties to ensure that Southwest Mississippi gets a fair shot in the competition for economic stimulus monies and jobs.”

“There is no better training than trying to make a small business work,” Poore said. “I have the practical experience necessary for the job and know that listening to you and working for you is the job. My optimism for Southwest Mississippi knows no boundaries. …  I believe we can make Southwest Mississippi the perfect place for the next eight generations of our families to call home.”

Poore said she believes the District 37 State Senator should be one who effectively collaborates with state and legislative leaders to accomplish more for Southwest Mississippi.

“By improving our infrastructure of utilities, transportation and communication; strengthening our academic, educational, and vocational training programs; and focusing on the development of our bountiful natural resources, I believe that opportunities will flourish in Southwest Mississippi,” Poore said. “As a State Senator, I can use my vision for Southwest Mississippi to help pass legislation to make these things a reality.”

Melanie Sojourner of Natchez served in the District 37 Senate from 2012 to 2015.

Sojourner said she is part of the sixth generation in her family to grow up on her family’s farm in the Kingston community and graduated from Adams County Christian School, Copiah Lincoln Community College and Louisiana State University.

She then worked for the Mississippi Cattlemen’s Association and later moved to Colorado to serve as the director of the National Cattlemen’s Beef Association’s member services department.

When she returned home in 2005, Sojourner said she, “like a lot of people” was disappointed with where things were after many well-known businesses crumbled.

“I just felt like we needed to work harder to do better for Southwest Mississippi,” Sojourner said.

When she ran for State Senate District 37 in 2011, Sojourner became the first Republican candidate to fill the seat in 150 years, she said.

In her first year in office, Sojourner was appointed as Chairman of the Senate Forestry Committee, making her one of the first freshman senators in Mississippi history to serve as a committee chairman, she said.

“I’m proud of the record we have accomplished, and I say ‘we’ because I had a great working relationship with elected leaders from across the district,” Sojourner said. “… I still have a desire and a passion to work for the people of our district. I believe if we don’t do something today, more and more of our young people are not going to able to come home, find good enough jobs to raise a family and live in Southwest Mississippi.”

Sojourner said her experience having served on the state senate makes her more qualified than any of her opponents.

“I’m the only candidate to have served in the state senate, and only one who has acquired years of senate seniority,” she said. “I was chosen as the first freshman in Mississippi history to serve as a committee chairman. I was named best in job creation by the business and industry community. I was named best for small business by NFIB. I’m the only candidate in the race endorsed by the National Rifle Association. For four years I have shown that I have the leadership ability to build a coalition and work with others to actually author legislation, to see it pass and then to have it signed into law by the Mississippi governor.”

Sojourner said he believes in working to pass policies that make Mississippi more business and industry-friendly and actively working with local communities to recruit new business owners and industries to their area.

Sojourner said she also advocates better funding in terms of teacher salaries and money spent on students in the classroom as opposed to top-heavy administration spending.

Sojourner also said she would work to improve roads and bridges and public safety.

“We should do that by prioritizing state spending,” Sojourner said. “Mississippi doesn’t have a revenue problem, we have a spending problem. … It was an honor to serve the people of our district and I would be very much honored to have their vote and continue what we’ve started.”

Republican contender, Kevin B. Wells said he is a native of Baton Rouge who chose to live in Amite County for 35 years.

Wells said he also is the proud father of Hannah and Ryan Wells.

“I have never failed at a company start-up and development,” Wells said. “I also have a track record of 33 years of increased revenue. I have served as president of multiple civic organizations, McComb Lion’s Club, McComb Exchange club and the Mississippi Storage Owners Association.”

Wells attended Southwest Mississippi Community College and Southeastern Louisiana University. As a Christian, Wells said he advocates Christian values and is a supporter of the pro-life movement as well as an individual’s right to own guns, businesses and land.

“I am your pro-Mississippi candidate and I am asking for your vote,” Wells said. “The reason I chose is to get off the sidelines and take action. Watching politics on a national level is very disturbing to me. I cannot watch our state and national government deteriorate to socialism.

“Mississippi is lacking in high-paying jobs combined with a low-skilled population. We need to teach those who will not go to college a vocational skill. The climb will be long and difficult, but doable.”

Wells said he would also agree to a higher tax on gas in conjunction with abolishing Mississippi’s state income tax. That way, he said, both locals and travelers passing through the state participate to increase the state’s revenue.

“I am qualified to run because of my experience in both the management of money and business experience,” Wells said.

NATCHEZ — The deadline to cast in-person absentee ballots before Tuesday’s primaries is noon Saturday and the Adams County... read more