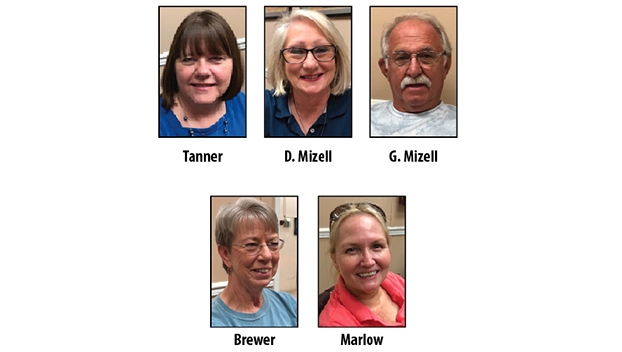 NATCHEZ — Elizabeth Tanner’s friend was having trouble dealing with the loss of her husband last year, so Tanner said she suggested they attend a grief support group meeting she had heard about being offered at Parkway Baptist Church.

Tanner’s friend did not want to attend the meeting alone, so Tanner tagged along. To be able to sit in on the meeting, however, organizers asked if Tanner had lost a loved one, so she said, yes, she had lost her mother to cancer 50 years ago.

Not long into that first meeting, Tanner said she discovered that she had never taken the time to grieve for her mother.

Tanner said she went on with her own daily responsibilities of school and taking care of family without ever fully acknowledging the loss of her mother.

“I never let go of that role,” Tanner said, “until 50 years later. You have to acknowledge the loss.”

The GriefShare support group offered through Parkway Baptist Church, 117 Seargent S. Prentiss Drive, is a 13-week program that brings together people who have lost loved ones to help them through the grieving process.

GriefShare is a Bible-based international program that offers seminar programs, including videos, with experts on grief and recovery and the meetings are led by a group of local volunteer facilitators.

Debbie Mizell and her husband, Glenn Mizell, who are facilitators at Parkway along with Sherri Brasher, Judy Richards and Danny Richards, said each group typically has between eight and 12 participants, some who have been through previous programs and other new members with each session.

“They don’t have to say anything if they don’t want to,” Debbie Mizell said of participants.

Participants can just attend and hear the programs and other people’s experiences, Debbie Mizell said.

The church has been sponsoring GriefShare support programs, offering two, 13-week programs per year, for 10 years, Debbie Mizell said. During those past 10 years, the program has helped some 160 people through the grieving process.

New members can join anytime during those sessions, and the only cost is a $15 workbook, Debbie Mizell said.

Participants can attend as many programs as they would like.

The next 13-week session is scheduled to begin 3:30 p.m. Aug. 25 and continues through Nov. 17 for two hours every Sunday at Parkway Baptist Church.

“Year two has been harder than year one since he died,” Brewer said, adding that daily reminders of his absence pop up, including chores he used to do around the house such as cutting the grass.

Brewer said she plans to attend this year’s sessions as well.

Susan Marlow, who attended previous sessions with her sister after the loss of her sister’s son and daughter, said she plans to attend the upcoming session as well since she has also lost her mother.

All of the participants said the program is helpful in sharing experiences with others who are also dealing with grief and learning from each other’s experiences combined with the lessons in the workbook and exploring Bible verses.

“Others can sympathize, but group members can empathize,” Brewer said of the process.

“Knowing how to deal with the loss,” Debbie Mizell, “really helps. Every individual deals with it differently. It is especially helpful for people who have never dealt with grief.”

The GriefShare grief support group will be 3:30-5:30 p.m. Sundays, Aug. 25-Nov. 17, at Parkway Baptist Church, 117 Seargent S. Prentiss Drive. Details 601-442-7434. Signup at griefshare.org. Attendance is for people who have lost loved ones and the registration fee is $15 for a workbook. Scholarships are available.

City given new way to view river from Natchez bluff