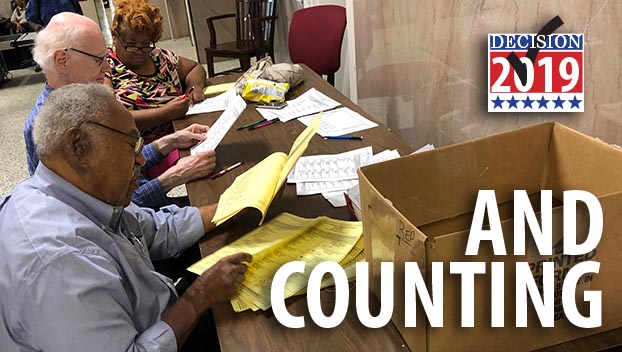 Members of the Adams County Democratic Party resolution board Jackie Marsaw, Tom McNeely and Wilbur Johnson Sr. count ballots in the hallway of the Adams County Courthouse on Friday. Election commission members said results from Tuesday’s primary elections likely will not be certified until Monday.(Scott Hawkins / The Natchez Democrat)

“We ran a number of absentee ballots yesterday that the scanner would take and updated the files for those,” Gardner said Friday morning, “but the Democratic Party resolution board is here going through all of them that the scanner could not count.”

Party primaries are conducted by members of the Democratic and Republican parties in conjunction with the election commission.

“We are moving along,” Gardner said.

Members of the Adams County Democratic Party resolution board, Jackie Marsaw, Tom McNeely and Wilber Johnson Sr., sat at a table outside of the Adams County Circuit Clerk’s office on Friday hand counting the absentee ballots that Gardner said could not be scanned by the system.

“The Republican resolution board has done theirs, but I haven’t added the other ballots into the system yet,” Gardner said. “I want to add both parties at the same time.”

Gardner has said the county’s election machines are outdated and need to be updated. They require data cards from all of the 19 individual voting precincts to be inserted into a computer and downloaded before the numbers can be totaled by the computer, Gardner said.

With Republican and Democrat primaries last Tuesday that amounts to several data cards for both parties from each of the 19 precincts, and Gardner said he does not anticipate the votes to be certified until Monday.

In the race for District 1 Adams County Supervisor, the margin is close but if the trend holds up it appears Democratic challenger Wes Middleton could claim a victory over incumbent Democrat Mike Lazarus. No independent or Republican candidates are vying for that position.

“I think the votes will trend like they did in the primary and essentially stay the same,” Middleton said. “I wish I had a little more cushion but we will wait and see.”

Lazarus said he has not been paying much attention to the vote count and certification process.

“I know from experience usually the absentee votes mirror whatever the election results were,” Lazarus said. “Sixty votes would be a whole lot to overcome, so I’m good, whatever. I just want what is best for Adams County.”

Below is a breakdown of the latest updated but unofficial, uncertified numbers from Tuesday’s primaries in Adams County’s contested races:

NATCHEZ — Natchez is home to a lot of old structures that need a lot of love and maintenance,... read more