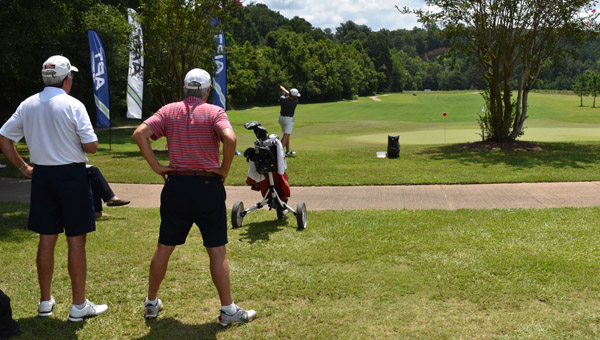 Hunter of Mobile leads APT at Beau Pre, 3 in second

NATCHEZ — After three rounds of play at the All Pro Tour’s 2019 Taco Bell Natchez Classic at Beau Pré Country Club, Wesley Hunter of Mobile, Alabama, continues to lead the way after yet another bogey-free round of golf.

Just one day after jumping into the lead after a round of 7-under-par 65 on Thursday, Hunter continued his solid play with a round of 4-under-par 68 on Friday for a three-day score of 15-under-par 201.

He will have to fend off a quartet of players who are just three shots back, including one who is a familiar position.

That would be Jacob Bergeron of Slidell, Louisiana, who finished in second place last year. Bergeron fired a round of 5-under-par 67, which included six birdies, three bogeys, and an eagle on the par-5 fifth hole, for a three-day score of 12-under-par 204.

Bergeron is tied for second with Stephen Shephard of Niceville, Florida, Braden Bailey of Groves, Texas, and Brandon McIver of Billings, Montana, Shephard’s round was highlighted by eagles on two par-5 holes — No. 5 and No. 18. He also had three birdies and just one bogey for a round of 66.

Brax McCarthy had it to 11-under-par total after 10 holes on Friday, but two bogeys and a double bogey on the back nine probably put him out of contention as he ended shooting 1-under-par 71 and is in 14th place at 9-under-par 207.

As for how the tournament itself is going, tournament director Patrick Murphy said, “It’s been going very well. We had 71 (players) at the start of the tournament and 25 made the cut. The weather had been really good to us, even though it’s been hot.”

Murphy said he was pleased with the number of spectators who showed up the first two days and expected the attendance to be good on Friday and Saturday.

While the majority of the participants in this year’s tournament are from the United States, other nations being represented are Argentina, Australia, England, and Guatemala.

“We run a very strong tour. We provide guys with fair and tough tests for those trying to make it to the next level,” Murphy said.

Alden Fortner of Plano, Texas, who began the third round just one shot behind Hunter after he, too, had a bogey-free 65 on Thursday, could not keep the momentum going on Friday as he struggled to shoot even-par 72 and is tied for seventh place and five shots back at 10-under-par 206.