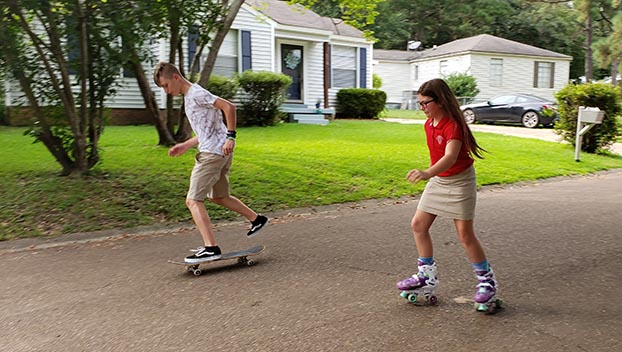 NATCHEZ — Friday was a day of “firsts” for one Natchez family.

When The Dart found its way near his home on Eastbrook Road Friday afternoon, Blade Miller was testing out his first tricks on his new skateboard while his step-sister, Ali Welch followed on her rollerblades.

“I just started skating a few weeks ago with my friends at camp,” Miller said, “and I got my own board last week.”

Miller said by the time he made it home from the Youth America Leadership camp in Oklahoma, he had already taught himself how to do a short Ollie — a jump using the skateboard — though he hadn’t fully mastered it quite yet.

Miller and Welch practiced their skills on wheels Friday after their first day back in school from summer vacation, which presented even more firsts.

“It’s a new school to me,” Welch said. “Most of my friends started back with me, but one of them moved away.”

In addition to rollerblading, Welch said she enjoys playing softball and would be trying out for the junior high team for the first time later this school year.

Welch said she was not as excited to be back in her school desk as Miller, who is now an official freshman at Vidalia High School.

Miller said he also plays basketball and is looking forward to playing on the high school team and showing his friends his newfound abilities on the skateboard.

In honor of its 50th anniversary, The Markets celebrated with a birthday party packed with delicious food, fun and by... read more