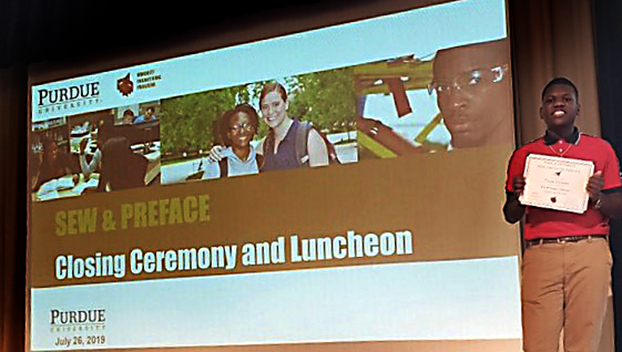 J’Lon Prosser graduated from an engineering camp at Purdue University in July and holds his certificate. He is the son of Kenneth Prosser Sr. and Keisha Prosser.(Submitted photo)

RIDGECREST — J’Lon Prosser, a junior at Concordia Parish Academy of Math Science and Technology, said his future was undecided until last summer when an engineering camp at Purdue University in Indiana helped him decide.

“I wasn’t sure what I wanted to do so I decided to test out engineering,” Prosser said. “I wanted to see what was so important about it and I heard success stories that other people had with it.”

In July, Prosser said he and one of his classmates traveled to the camp and spent a week studying 12 different kinds of engineering, one of which caught his attention.

Prosser said after conversations he shared with students on campus, he decided he would study biomedical engineering at Louisiana Tech University.

“When I interacted with college students on campus, they told me more about it and told me how important it is,” Prosser said. “At first, I thought engineering was just one thing — building things. I didn’t know it was spread out into so many different categories.”

Prosser said his favorite part of the trip, however, was making connections with people instead of parts.

“I enjoyed meeting new friends from all over the country,” he said. “I’ve made friends in Chicago, Indiana, Ohio, Wisconsin and Texas.”

Prosser is the head drum major in the Ferriday High School band and the junior class vice president at CPA.

He is also a member of the National Beta Club, 4H club and the Student Advisory Council and enjoys spending time with friends and family and playing baritone.

He is the son of Kenneth Prosser Sr. and Keisha Prosser.

Last of Summer: Family enjoys Labor Day of cooking out, having fun

Friends and family spent time cooking out and playing together during the Labor Day holiday. read more